Long-range hunting has been rapidly gaining in popularity in recent years. Some call it a modern trend – several Youtube channels such as THLR.NO and EuLRH have attracted a considerable number of followers with their excellent videos. A rifle scope is a must-have for every long-range hunter.

Even though it has not always been as popular as it is now, long-range hunting has been present for a long time. It originates from the alpine regions, the home of the chamois. A chamois hunt is not a simple one – it takes a great physical condition and considerable knowledge of the ballistics to succeed. In the past, hunters mostly used rifles chambered for high-velocity calibers such as 6.5x68, 6x62 Freres and similar, combining them with rifle scopes featuring a magnification power up to 12x. These rifles were usually zeroed at 200 m, meaning that the hunters didn't have to do any drop correction even when shooting up to 300 m.

After the turn of the century, some hunters started using tactical equipment for hunting. The use of tactical rifles and tactical rifle scopes allowed them to hunt at much longer distances than before. This type of hunting was especially popular in the US. In Europe, the majority of hunters used a different approach. Instead of purchasing tactical equipment, they looked for hunting rifles and rifle scopes with long-range shooting capabilities. The main reason for the European hunters' different approach is linked to their hunting culture and tradition. Sport optics manufacturers heeded their wishes and started producing rifle scopes suitable for long-range hunting.

It is important to note that taking a long-distance shot is morally acceptable only when the shooter is well-trained for it. Shooting at a live animal too far away is not in accordance with the principles of the ethical hunt. Harvesting should only be carried out when the shooter is 100% sure of his or her capabilities and have sufficient knowledge of ballistics for an ethical shot. 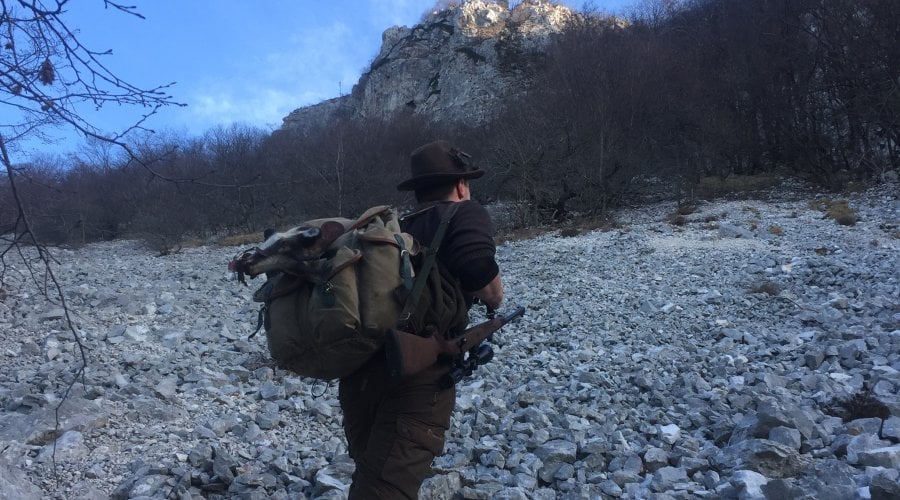 Long-range shooting originates from the alpine regions, the home of the chamois

They boast a high maximum magnification power, 16x or more. This allows the shooter to accurately examine the game before taking the shot. The objective lens diameter measures around 44 mm in diameter – ideally, the lens is not too big since most long-range shots are taken in the mountains where it is important not to carry too much weight. Adjustable parallax is a must-have with such riflescopes as it allows the user to properly focus the target when the magnification is set to high power. Some of these rifle scopes are optionally available with a BDC turret. With a BDC turret, the user can quickly compensate for the bullet drop at various distances, which is especially useful during mountain hunts where distances to the game vary. An illuminated reticle is not a crucial feature since most long-range shots are done during the day. Still, it might prove useful in certain situations. Having a thin reticle is much more important – when the magnification is set to high power, a thick reticle covers too much of the target, making it more difficult to decide whether the shot should be taken or not. 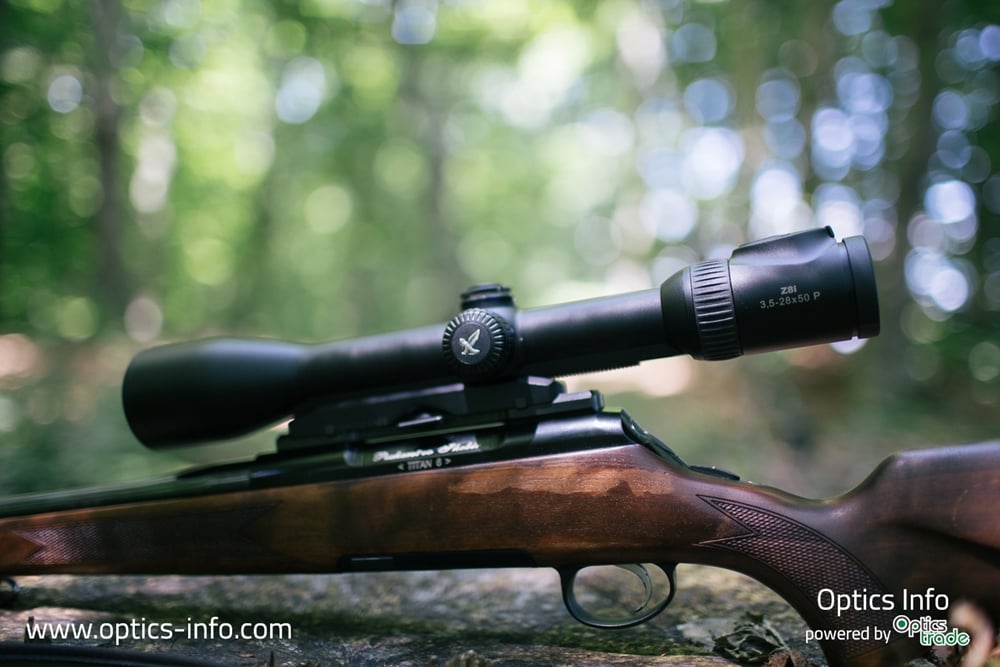 You can greatly benefit from having a laser rangefinder in a hunting rifle scope. These high-tech devices emit a laser beam that reflects from the surface of the target and finishes its path at the sensor which is a part of the laser system. A distance to the observed object, based on the time passed between the emission and reception of the laser beam, is displayed on the screen inside the rifle scope. The most modern rifle scopes are capable of providing the user with a holdover dot or the number of necessary windage and elevation adjustments required to hit the target.

One of the first rifle scopes of this type was Swarovski LRS 3–12x50, introduced in 1997. Zeiss followed soon after, launching two Diarange rifle scopes – 2.5–10x50 and 3–12x56. Swarovski and Zeiss engineers' ideas were ahead of their time – their civilian laser rangefinding rifle scopes were not as commercially successful as planned. As the demand for such rifle scopes increased, many other optics manufacturers recognized the potential. Nikon, Bushnell, and Burris were among the first to introduce affordable LRF rifle scopes. Burris was the most successful – a laser-rangefinding rifle scope remains in their offer to this day, now with an added ballistic calculator and bullet drop correcting technology. In 2017, Swarovski made a comeback with the introduction of dS 5–25x52, an advanced LRF-rifle scope with a ballistic calculator, aiming point corrector, and Bluetooth connectivity.

Many hunting rifle scopes for long-range shooting are optionally available with BDC elevation turrets for quick bullet drop compensation. Such turrets are uncapped and similar to tactical turrets at first sight. Instead of standard clicks found on tactical turrets, BDC turrets feature numbers that indicate at which position the rifle scope is zeroed at a certain distance (1 – 100 m, 2 – 200 m, 3 – 300 m, etc.) This allows the user to quickly compensate for the bullet drop at various distances.

The first BDC turrets were introduced by Kahles. They called the technology multiZero. The idea was a great one, and other manufacturers soon followed, introducing their own designs.

The simplest turrets in this category feature standard clicks only but these are not real BDC-turrets – they are actually tactical turrets and lack BDC turret features – nevertheless, certain manufacturers call such turrets ‘BDC’.The BDC turrets available in the Conquest V4 series of rifle scopes are a great example. True BDC turrets come either with several rings – each ring is compatible with a ballistic trajectory of a certain caliber or group of calibers (Zeiss Victory V8, Leica Magnus) or with adjustable markings for various distances (Swarovski BTF turrets). BDC turrets are of the single turn type and are equipped with a Zero Stop mechanism. Often, the turrets have a locking function. BDC turrets are an extremely useful addition to a long-range hunting rifle scope. 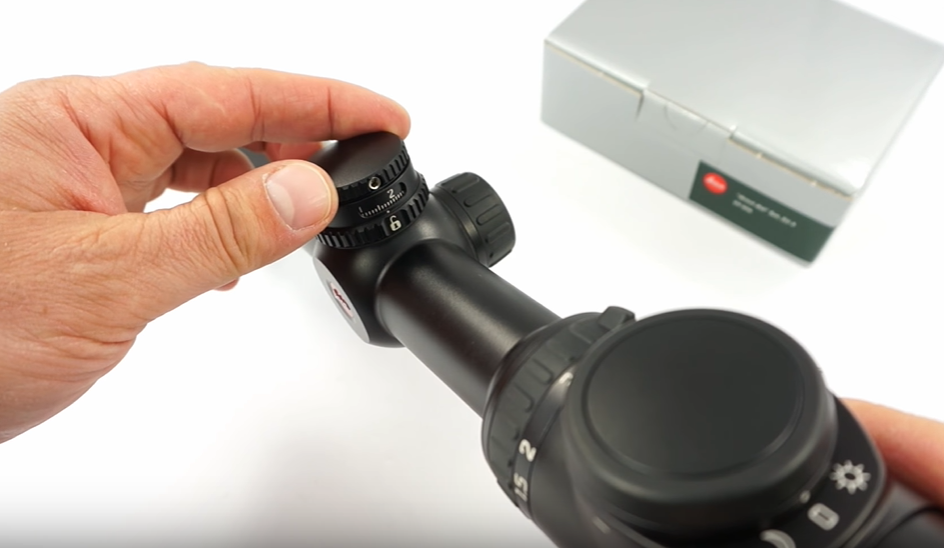 A BDC Turret on a Leica Magnus Rifle scope

Often, there is a possibility of purchasing a long-range hunting rifle scope with a BDC reticle. This reticle is similar to the tactical one since it features many holdover lines under the reticle’s center. In most cases, however, it is in the second focal plane when it comes to long-range hunting rifle scopes, meaning that the reticle remains of the same size regardless of the set magnification. This means that the subtensions change with the increase or decrease in magnification. For this reason, only the reticle subtensions at the highest available magnification are provided by the manufacturer. The result is limited usefulness. The user can only benefit from such a reticle if it is in the first focal plane, which means that having an SFP ballistic reticle is senseless. We advise against the use of such reticle and recommend a choice of a standard hunting reticle instead (4A, Duplex, etc.) A combination of a standard hunting reticle and a BDC turret is the best choice by far.

To get a short presentation of Long-Range RifleScopes click here.