The story of Sauer & Sohn company began way back in the year 1751. The company was founded by Lorenz Sauer in the German city Suhl and until today it still lives up to its reputation as the oldest firearms manufacturing company in Germany. At its very beginnings, the company predominantly focused on producing firearms based on military contracts. The ‘Seven Years War’ in 1753 resulted in the company's first larger orders for the Prussian army.

Almost ninety years later, the eponymous grandson of Johann Paul Sauer started his business unit and around the same time, in 1839, the company changed its name to Spangenberg & Sauer. After the death of co-owner Ferdinand Spangenberg in 1873, Johann Paul Sauer, together with his sons Rudolf and Franz, took over the majority ownership of the company and re-named it to ‘J.P. Sauer & Sohn’. Soon after, the company reached its highest order to that point - approximately 150.000 rifles were produced for the German army. However, the number of military orders decreased severely in the following years, thus forcing the company to find new ways of expanding its market.

As the middle class grew, the demand for civilian arms production increased. The company knew how to exploit this economic situation and consequently presented its first SBS rifle in 1881, followed by the first catalogue which was released one year later. The innovativeness did not stop there – the company's success was at its very beginning, to say the least. As it grew, it began to gradually focus on hunting rifles. Thereupon, the first Sauer self-cocking drilling with a separate cocking lever for the ball lock was presented and launched in 1895. Twenty years later, the company presented the Sauer Meisterwerk XVIII shotgun that boasted sear, single trigger, ejector and engraving by Franz Schilling.

During the First World War, they mostly re-focused on military production and expanded its establishment along with the number of staff. However, the social and economic penury after the war, made the company struggle in the following years. To ensure its survival, the company started producing various products such as typewriters under the name Fortuna; for a short period, they also manufactured bikes. Due to the prohibition of military production, the construction of light hunting rifles was launched in 1930 with the triplet Mod. 30 and Mod. 30 L being introduced the same year and Mod. 32, Mod 32 L, Mod. 33 shortly after.

The shift in production happened again at the beginning of the Second World War when orders for military purposes firearms were increased. After the War, being deleted from the commercial register and under total soviet occupation, the company continued its production under different names - 'VEB FORTUNA Werk Suhl' and later 'VEB MEWA Ernst-Thälmann-Werke Suhl'. At that point, Rolf Sauer sold all company's rights to a group of industrialists in FRG. Nonetheless, the company still used its original name J.P. Sauer & Sohn for the production of hunting rifles years later. In 1951 J.P Sauer & Sohn GmbH was founded as the first hunting rifles manufacturer in FRG.

Soon after some of the most recognizable models were presented, such as Drilling Model 3000, which replaced the famous S53 Drilling, Model 80 bolt action rifle, Sauer 200 (the first modular action rifle in 14 calibres), the S 200 and Sauer 202.

After the year 2000, the ownership changed again when passionate hunters Michael Lüke and Thomas Ortmeier took over. At that turning point, the company shifted to focusing exclusively on the production of hunting rifles, presenting several popular models such as SAUER 303 self-loading rifle, SAUER 101, SAUER 202, SAUER 404, SAUER 404 Synchro XTC, SAUER 100, Sauer S 100, SAUER SL5 and SAUER101 Highland XTC. Nowadays, the brand's vivacious history and tradition of over 270 years result in quality and experience, thus offering an infallible choice for every hunting enthusiast.

Sauer 404 is a push feed bolt-action rifle that features an improved manual cocking system and six locking lugs that lock directly into the barrel which offers extra protection. The Quattro trigger can be adjusted using four different pull weights which increases the comfort and predictability of the shooting experience, moreover, the positioning of the trigger within the trigger guard is also adjustable along 8mm length and askew 5 degrees swivel range.

The rifle is equipped with a manual hand cocker which keeps the mainspring in a relaxed position, eliminating the possibility of a misfire. In addition, the modular system allows for the bolt head to be removed and placed aside whenever the rifle is not in use.

Takedown of the rifle is simplified - barrel and bold head change now allow for switching between different calibres within minutes using the included Allen key tool that is housed in the front of the rifle. The receiver is made of high-alloy aluminium and embodies the Sauer Universal Mount (SUM), which can now also be found on Sauer 303 variants produced after 2019.

Sauer 404 can be chambered for the following calibres:

Calibre choice depends on the variant.

The rifle is available in the following variants:

All Sauer 404 receivers use SUM technology for mounting purposes. 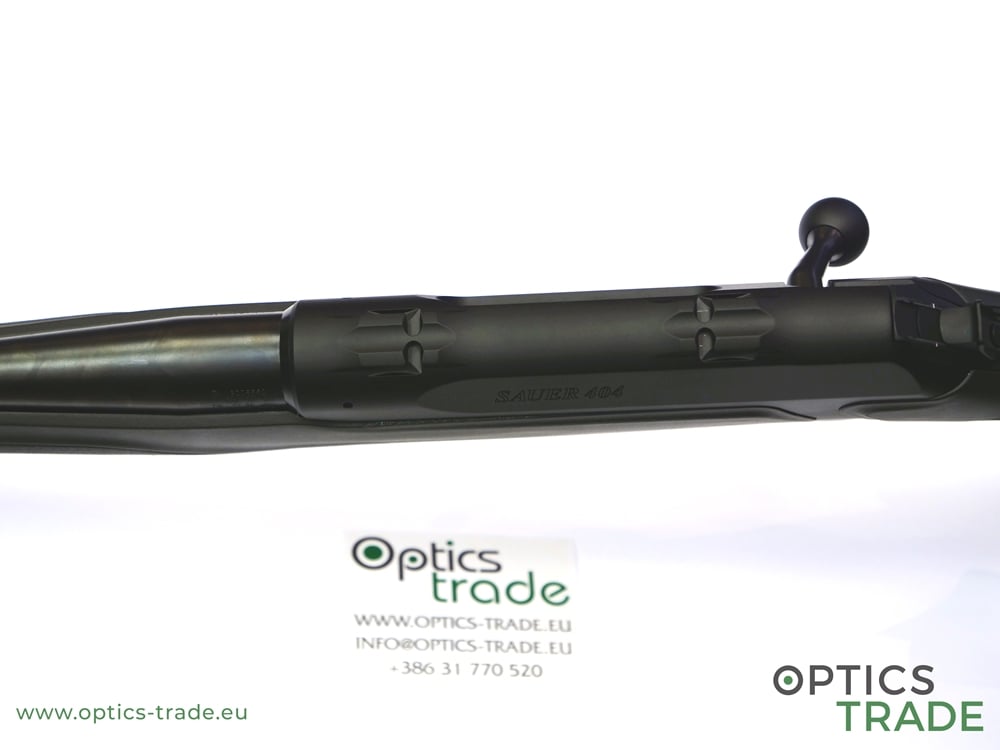 Which Rifles Have Interchangeable Mounts

For one-piece mounts to fit on a rifle, mounting surfaces on these rifles must match in every dimension.

Our Recommendations for Mounts

his aluminium INNOmount mounting solution is produced in Germany and will be a perfect match for Sauer 404. This rifle uses a unique SUM mounting surface that is also used on newer versions of Sauer 303 (produced after 2019).

If you happen to own this or any other rifle, we would appreciate it if you could help us expand our database by sending us some photos of the rifle receiver (the bare mounting surface of the rifle without the mounts installed). For your help, our company offers a fair return in terms of practical rewards.