Back in 1811, Friedrich I of Wurttemberg launched an arms factory in Oberndorf, Germany. Employing 133 workers, the company officially started its business in the following year serving as the royal weapon forge. The initial moderate success of the company was refined in 1867 when Wilhelm and Paul Mauser came up with an innovative rotating bolt system used for breechloading rifles. Most of their rifles at the time were built around a 7.9x57J cartridge which eventually became known as the 8mm German cartridge.

Alongside the Model 93 release, the smaller, 7x57mm cartridge was introduced. The United States spotted the potential of German ingenuity; hence they incorporated many features of Mauser design into their 1903 Springfield and so did the United Kingdom with their SMLE rifle that was the standard of British infantry units up until the 1950s. Soon after, many countries around the world, such as Turkey, Brazil, South Africa, Iran, Sweden and even China had recognised the outstanding performance of Mauser 93 and began flooding the company with new orders.

Along with their rifle production success, Mauser also broke new ground in 1896 with the introduction of their autoloading C96 pistol that was produced up until 1936. In 1897 the Mauser family were given control over the factory and renamed it Waffenfabrik Mauser AG. Only a year later, one of the most recognisable Mauser rifles of all time was presented by the company – Mauser Gewehr 98. The rifle had been redesigned with some of the noticeable changes being better-ruptured case gas venting, a stronger receiver with a larger receiver ring and an extra third locking lug providing additional safety. In later years, numerous rifles were derived from the original Gewehr 98 design, a lot of them being manufactured by various German contractors.

In the first decades of the 20th century, Mauser introduced a myriad of hunting rifles such as Type A, Model B, Model K, Armee-Model C and Africa Model. Up until the 1960s, various other models were presented including M1916, Mauser 1925 Special range, Karabiner K98, Mauser KKW cadet rifle, Gewehr 41 etc. Alongside their rifle production, the company additionally focused on the production of hand and pocket pistols, with some of the most recognizable models being Mauser 1910, Mauser 1914, Model 1934, and Mauser HSc.

After World War II, when the company was seized by Allied forces and placed under French control, the factory was torn down, and its records were destroyed. The former Mauser engineers Edmund Heckler and Theodor Koch, together with their associate Aled Seidel founded Heckler and Koch arms firm in the following years, recovering some leftovers of Mauser company which remained in the arms of Allied forces until 1952 when it was again permitted to continue manufacturing firearms. In the second half of the 20th century, the company presented some new models such as Model 66, Model 77, Model 86SR, Mauser SP66, Models 94 and 96, Mauser SR 97, Mauser 90SA and Mauser 90DA.

The Rheinmetall Berlin AG bought the firearms division of the company in 1996 and renamed it to Mauser-Werke Oberndorf Waffensysteme GmbH. In 1999, part of the Mauser was sold to Schweizerische Industrie Gesellschaft company often referred to as SIG, which later became known as Mauser Jagdwaffen GmbH.

Today, the company is under the parentage of the Blaser Group, which also manufactures rifles under the J.P. Sauer & Sohn brand. Mauser has presented some new models in the last few years, such as Mauser M03, M12, and M18, attesting to the company’s rich and successful history once again.

Mauser M03 is a push feed bolt-action rifle introduced in 2003 and manufactured up until 2020. It is built on a steel inner chassis allowing for additional strength and rigidity of the rifle and is available in both – synthetic and wooden stocks.

There are six locking lugs set in a double, three-lug formation that lock up safely directly into the barrel. The receiver features a double-square bridge developed especially for Mauser M03 mounts. A useful feature is a takedown option which makes it possible for quick and effective changing between the barrels by loosening the two screws at the lower end of the forearm stock. Positioned on the rear bolt shroud is the cocking lever mechanism that is engaged by pushing the lever to the leftmost position and disengaged by pressing a small know located under the lever that releases the firing spring making the rifle safe to carry around. The rifle only comes in one action length; however, the bolt heads can be easily changed for switching between standard and magnum calibres by pushing the cocking lever to the far left.

To open the bolt for top loading the cocking lever must also be pushed beyond the ‘safe’ position to the far left. The set trigger which is set at 1134 g (2.5lb) is activated by pushing the trigger blade forward, making the pull weight even lighter. M03 comes with a steel removable magazine that can hold up to five cartridges. 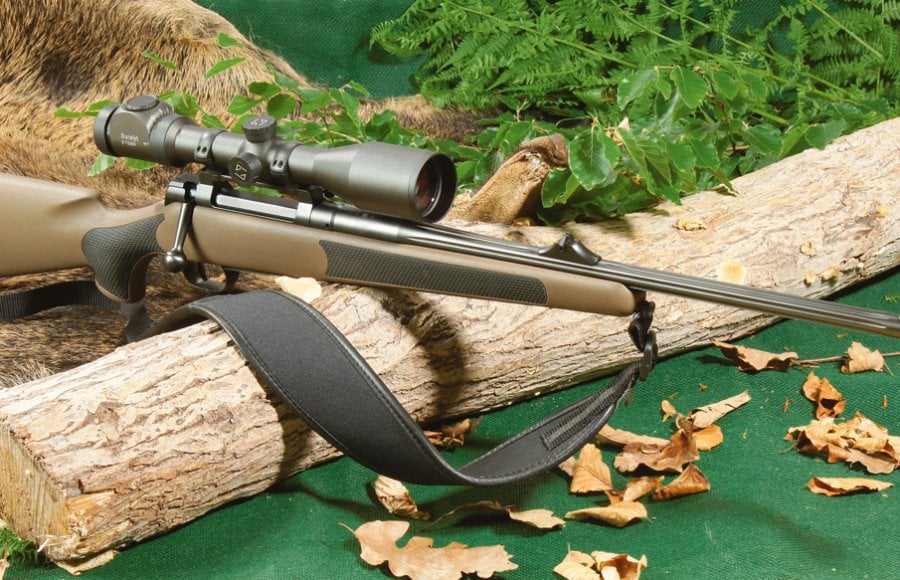 Mauser M03 can be chambered for the following calibres:

The rifle is available in the following variants: 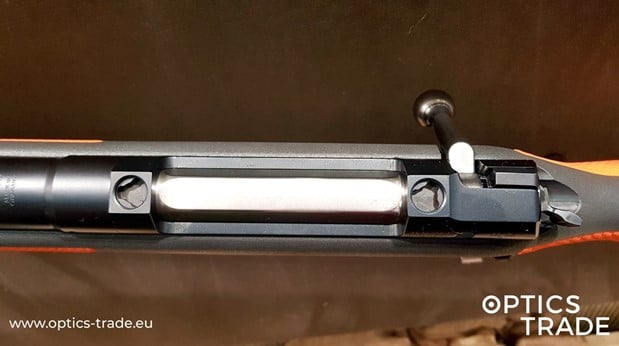 Figure 2: The receiver of Mauser M03

Which Rifles Have Interchangeable Mounts

For one-piece mounts to fit on a rifle, mounting surfaces on these rifles must match in every dimension.

Unfortunately, we currently lack information regarding interchangeable mounts for the Mauser M03 rifle due to the unique mounting surface. Should you have any additional information regarding possible mount matches, please contact us. We would gladly accept your help and expand our database accordingly.

Our Recommendations for Mounts

We recommend this detachable steel mount manufactured by the Mauser company itself. It will match the double square bridge mounting surface of the riffle perfectly.

If you happen to own this or any other rifle, we would appreciate it if you could help us expand our database by sending us some photos of the rifle receiver (the bare mounting surface of the rifle without the mounts installed). For your help, our company offers a fair return in terms of practical rewards.