The manual equatorial mount doesn't have a motor or a computer, meaning once the mount is polar aligned, the celestial target needs to be tracked manually.

The equatorial mount is made of: 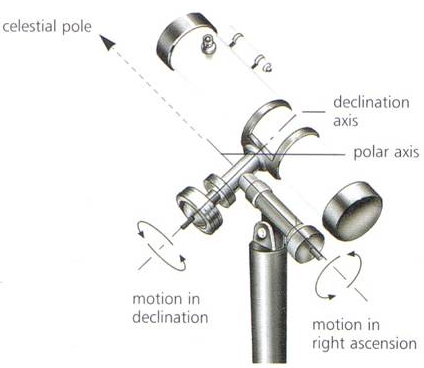 The telescope on an equatorial mount moves in two axes:

Polaris axis coincides with Earth's rotational axis (to track the right ascension of the object). For movement in the polar axis, telescopes need to be moved at the same rate as the Earth's rotation. The other axis is perpendicular to the Polaris axis and tracks the celestial object's declination.

Equatorial mounts are usually equipped with slow-motion controllers (in both right ascension and declination) and with counterweight, for proper balance. The slow-motion control function allows the user to slowly move the telescope in an arc – to track the celestial object as it moves across the sky.

An equatorial mount doesn't have a problem with the "field-rotation" effect. With added motor drive, it can be used for long exposure photography.