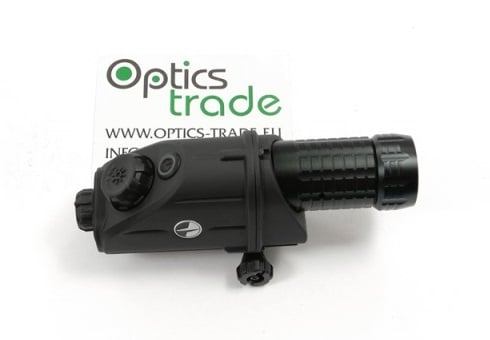 The older LEDs gave a small amount of light, but the newer are extremely strong. They almost completely replaced the older illuminators with an incandescent bulb because of many advantages.

Compared to the older illuminators with an incandescent bulb, they do not need an additional lens which lets through only the light in the infrared spectrum. LED 's can be built so that they radiate the light in a very narrow wavelength spectrum. They are also a lot more resistant to shocks, which is especially important if they are mounted on a clip-on night vision device, or directly on a rifle.

They have a very good infrared light output for a very small amount of energy used. That means, with a single battery the illuminator can work for many hours without a noticeable difference in power.

Most LED infrared illuminators on the market are very small and easy to mount on a night vision device or directly on the rifle. Of course, there are some exceptions, but the bigger illuminators are designed for extreme distance observations and feature a high infrared light output.

The energy LED 's use is very small, so a single battery can be used for many hours.

LEDs are also a lot more resistant to shocks compared to an incandescent bulb infrared illuminator. Because the light output is not "coherent", one illuminator can be used for many types of night visions. This means a LED illuminator with an advertised wavelength of 875nm radiates light from approximately 850nm up to 900nm. Because of that, it is visible for Gen. 2 and Gen. 3 night vision devices, but also for digital night vision devices.

Because the light out of an LED illuminator is not "coherent", this can also be a disadvantage:

Another disadvantage is especially noticeable on adjustable beam illuminators. When the light is focused on a small point for long-distance observations, the light gets a square shape. Normally it does not affect the image quality, but some users do not like it.

Which IR illuminator for which NV optic

Night vision optics are mostly used for hunting purposes. Because of that, the manufacturers developed many types of mounting solutions for their IR illuminators.

A short presentation of LED IR Illuminators is available here.