Picatinny rail consists of slots with 5.23 mm spaces between one another, which means that it can be used across its entire length. It is simple to mount and interchangeable – if something is made for a Picatinny rail, it will fit regardless of the manufacturer or manufacturing date. It is affordable, resilient and reliable – this is why it so commonly used by professionals and military. Because of all its great qualities, Picatinny rail has been dominating the rail market in the recent years.

Recknagel is currently the biggest manufacturer of mounts in Germany. Their Picatinny rails, known for great fit and finish, are mostly made of high-grade aluminum (a few are also made of steel), which is why they are very reliable. Screws are included. Currently, a common trend among rifle manufacturers is making receivers out of aluminum – mounting a Picatinny rail made of aluminum on one of those receivers is thus not problematic. Their products are marketed either under the name Recknagel or Era-Tac.

Steyr Mannlicher, a renowned company that produces firearms, was founded in 1864 by Josef Werndl. It soon grew into a big company with great production capacity. In 1882, they faced a small crisis because of lack of large orders (they had supplied the European armies with breech-loading rifles – demand declined). This is when Werndl used the company's production capacity to manufacture all sorts of products along with firearms: dynamos, electric motors, light bulbs, bicycles, cars, trucks. The company's most active years were without a doubt during World War I when more than 4000 firearms were made daily by its 15.000 employees. The company's name was changed to Steyr-Daimler-Puch AG in 1987.

It is important to know that SBS is not a rifle by itself, but an action (SBS stands for Safe Bolt System) which can be found in many different models of Steyr: Classic, CL II, SM 12, Pro Hunter, Pro Alaskan, Jagdmatch, Scout etc. SBS is a concept that deviates from the established principle of locking lugs at the rear of the bolt. Instead, two opposing lugs are formed at the front of the bolt. The safety catch has three positions: in the first position, the firearm is ready to fire and a red dot can be seen on the safety catch; in the second position, the user can see a white dot on the safety catch – the trigger is locked but the bolt can still be operated (loading, unloading); in the third position, where a white stripe and a white dot can be seen on the safety catch, both the trigger and the bolt are locked.

There is a difference between older (without SBS) and newer Steyr rifles (with SBS) as regards radiuses on the receiver (where holes are drilled for mounting purposes). The newer models are flatter (R35) than older models (R17.5, R15).

Steyr Mannlicher SM 12 is a bolt-action rifle that features Steyr's SBS (Safe Bolt System). There are two locking lugs on each side of the bolt, 4 lugs altogether. The action operates very smoothly. Its bolt operates on a 90-degree lift and has a Sako-like extractor with a pivoting claw at the head (push-feed). It also features two emergency gas ports. SM 12 is equipped with Steyr's Hand Cocking System which allows the user to manually cock the internal firing mechanism, which increases safety since it allows manual decocking of the firing pin. To load the firing pin and deactivate the safety, the user has to press it forward. To release it and engage safety by decompressing the spring, the user has to push it downward. The mechanism is very easy to operate and does not confuse the user, unlike some others. SM 12's barrel is chambered for .243 Win., .308 Win., 7mm-08 Rem., 7x64, .270 Win., .30-06 Sprg., .25-06 Rem., 6.5x55 SE, 8x57 JS and 9.3x62. The magnum versions are chambered for 7mm Rem. Mag., .300 Win. Mag., .300 Wby., 8x68 S, .270 WSM and .300 WSM. Magazine capacity is 4 rounds. There are 6 holes drilled on the receiver for mounting purposes – 3 at the front and 3 at the rear.

Scout, introduced in 1998, also features SBS (Safe Bolt System). It comes with a bipod (the two legs form a part of the stock) and has a flat top (there is Weaver rail on top). Steyr only produced Scout in two calibers: .223 Rem. and .308 Win. Its magazine holds five cartridges. 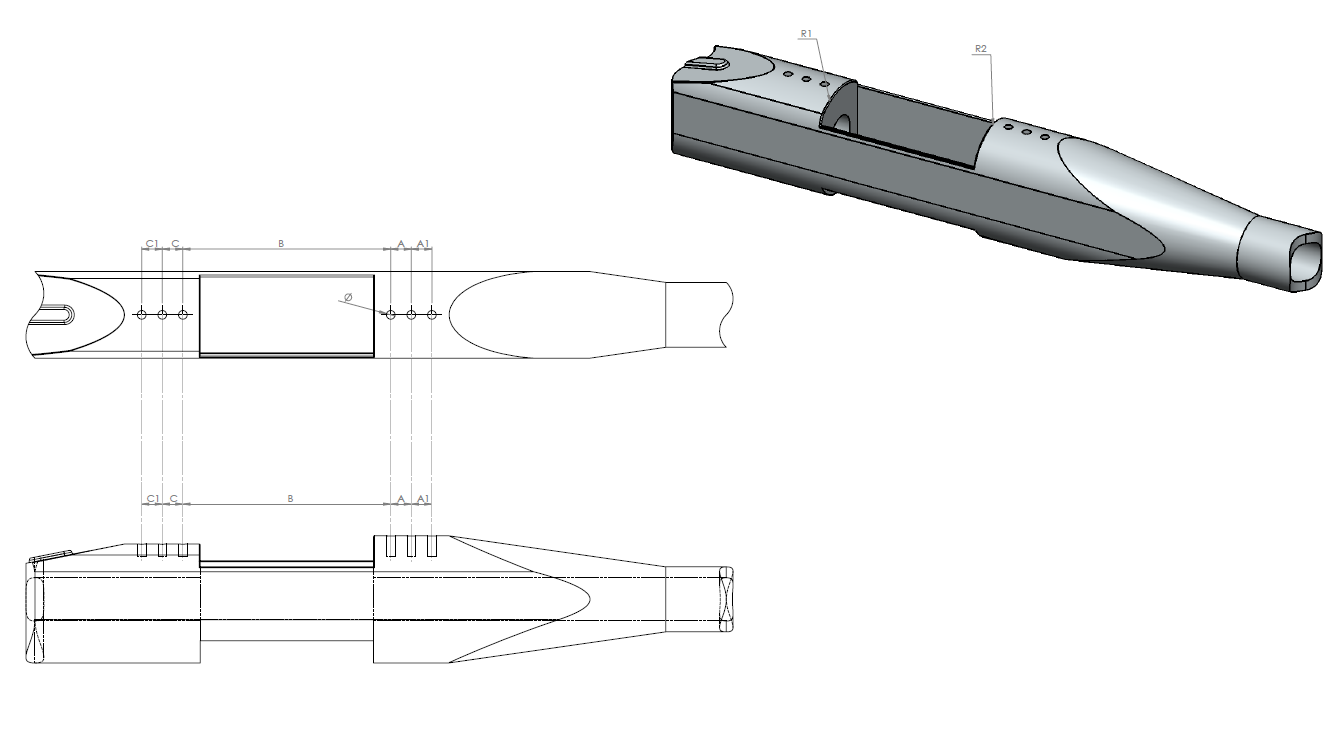 On our webpage, we have divided the mounts for Steyr rifles as follows:

If the radius of both mounting surfaces is R35, it means that the mount is designed for Steyr SBS. We have also added a distance between the inner mounting holes on the receiver (B distance – see the image above):

This mount is suitable for Steyr SBS with B distance of 87.5 mm.

Steyr rifles with SBS system have 6 mounting holes on the receiver (3 at the front and 3 at the rear). To choose an appropriate mount, you have to measure the distance between the inner holes (holes 3 and 4 – check the image above, distance B).

Remove all the stains (grease, oil etc.) from the rifle's receiver with a cleaning fluid (acetone). Once the surface is clean and dry, check whether the screws match the rail and the holes on the receiver. Make sure that the Picatinny rail is compatible with the rifle by inspecting the mounting holes on both. Before mounting the rail permanently, apply a minimal amount of thread-locking fluid 278 or 648 on screws and contact surfaces. Be careful not to get the fluid in or near the mounting holes. Carefully clean the remaining excess fluid around the rail with a cleaning fluid. Using a torque driver, screw the screws appropriately (up to 2.2 Nm) – do not overtighten.