The Docter Sight Reflex Sight is a sight with almost limitless application options. It is ideal as a home defense optic, as an element on a shotgun or for competitive shooting and it is also a very popular option for driven hunts. It can be used on handguns, shotguns, rifles...

The Docter Sight is a popular red dot open reflex sight and it is quite easy to mount to your firearm. The mounting possibilities are numerous. The base can be either fixed to the firearm or it can be detachable. The adapter plates come in many shapes as they need to fit perfectly to different firearms. Once you have found the proper adapter plate for your specific firearm you can continue to mount the sight itself to the adapter plate and via the plate to the firearm.

The Docter Sight is popular to use on handguns as well. When mounting the Docter to the handgun first you have to remove the rear iron sight as it will replace it. Then you have to install the proper adapter plate for Docter Sight in the place of the rear sight. A special tool is needed for this operation and it is wise that only an experienced gunsmith does this procedure. 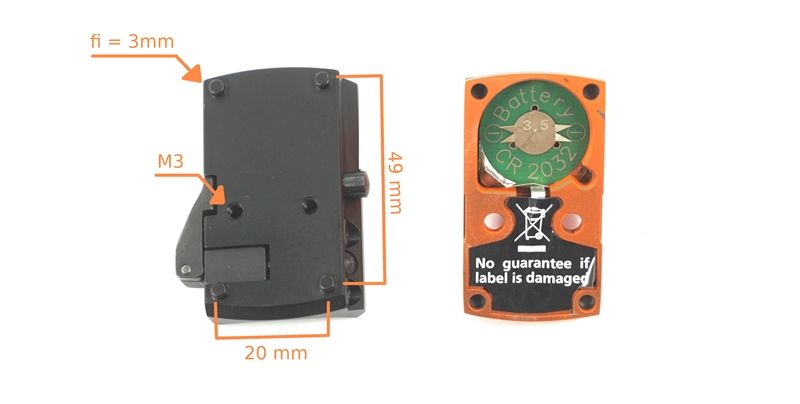 The upper side of the adapter plate has 4 positioning pins. The Docter Sight should be put onto the mounting plate in accordance to the 4 pins and fastened with two screws. Both of these two screws are fastened from above through the housing of the red dot to the plate below. Mentioned pins are in a way that the sight retains its point of impact even when removed and reattached. This is usually done each time when the sight need its battery replaced since it is located at the bottom of the Docter sight, between the sight and the adapter plate. For the mount to be watertight it has do be done properly with the help of sealing foil which is included in the delivery of the red dot sight. A combination of screws and precision positioning pins prevents shifting of the sight during use.

The same mounting standard is used by Leupold DeltaPoint, Meopta MeoSight and Burris FastFire. You can use the same mounts for Leupold, Meopta, Burris and Docter reflex sights. The recommended torque applied to the screws should not exceed 2.2 Nm.

MAKnetic for Sauer 303 for Docter Sight