Hello everyone and welcome to another Optics Trade Debates video. Today, we’ll be discussing the terms minimal and maximal exit pupil.

While the diameter of lens is a fixed measure, the variable magnification means that there are minimal and maximal exit pupil values. With a 2-10x50 rifle scope, where the power of magnification setting can be adjusted anywhere from 2 to 10, the smallest exit pupil is set at 5 millimeters and the biggest one possible at 25.

We conducted a simple experiment to show how minimal and maximal exit pupils work in practice. The instrument used in the video is a Swarovski Z8i 0.75-6x20 rifle scope. Using a flashlight, we direct a beam of light into the instrument lens and observe the size of the circle against the white box. This circle, specifically its diameter, represents the exit pupil.

However, note that the human eye can only dilate to 8 millimeters and cannot make use of excessive light that filters through the optical instrument beyond this range. This is why all premium scopes, including the Swarovski Z8i 0.75-6x20 used, limit their maximum exit pupil to around 10 millimeters.

Although we used a rifle scope in the video, this method of calculation is practically universal and can be also employed with other optical instruments such as binoculars, spotting scopes and all classical which have a variable magnification.

It is also important to mention that there might be some deviations in how much the human eye can dilate. In theory, the pupil diameter in the human eye changes in different lighting conditions from 3 to 8 millimeters. But in practice there are other factors, such as the individual’s advanced age and health issues, that can affect the eyes’ ability to dilate.

The standard optical instrument will already provide an exit pupil diameter above 10 millimeters, beyond the needs of the human eye that cannot use all the excess light that filters through. Still, individuals with a bigger eye exit pupil can enjoy a more forgiving eye box since their eyes can comfortably move anywhere within the circle diameter space and will still receive a clear image.

We would like to thank you for your time. In case we did not answer all the questions regarding this topic, please leave a comment below or send an email to us. If you found this video useful, please subscribe to our YouTube channel. 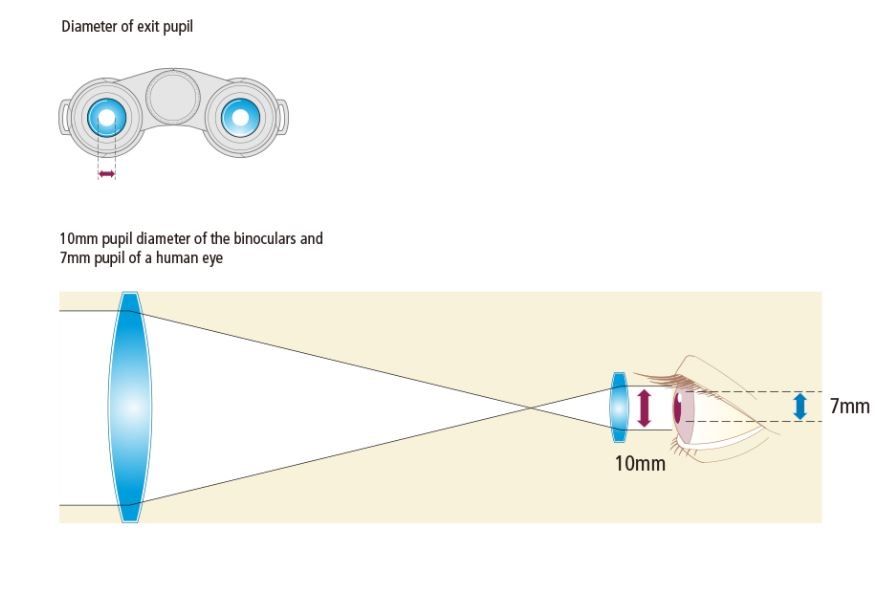