Where are Vortex binoculars made?

Vortex Optics is a US-based manufacturer of optics equipment primarily for birdwatching, hunting, wildlife watching and other outdoor recreational activities. Their main products include binoculars, riflescopes, spotting scopes, monoculars, red dots and rangefinders. Some of their products are also used by law enforcement agencies, such as the state police, drug enforcement and border control.

Originating in 1986, Vortex Optics started out their operations in Middleton, Wisconsin in the form of a small retail store, called “Wild Birds Unlimited” that sold optics products along with bird feed. Founded by Daniel C. Hamilton and Margie Hamilton, the manufacturer has remained American company since its conception and is still owned by the original family members today. The owners ran their business on the foundation of customer satisfaction and personalized service since the very beginning.

Unlike what many optics enthusiasts believe, the company initially started its operations with an emphasis on the sales of binoculars for birdwatching. The owners recall the binoculars of the time were not sophisticated as they are today and most of them had cheap construction and no glass coatings to improve optical performance. In addition, most binoculars were heavy, featured short eye reliefs and waterproofing capabilities only existed in the premium models. Before the establishment of Vortex Optics, Daniel persuaded several European optics manufacturers, like Swarovski, to introduce innovative products to the Americans, including high-powered spotting scopes. 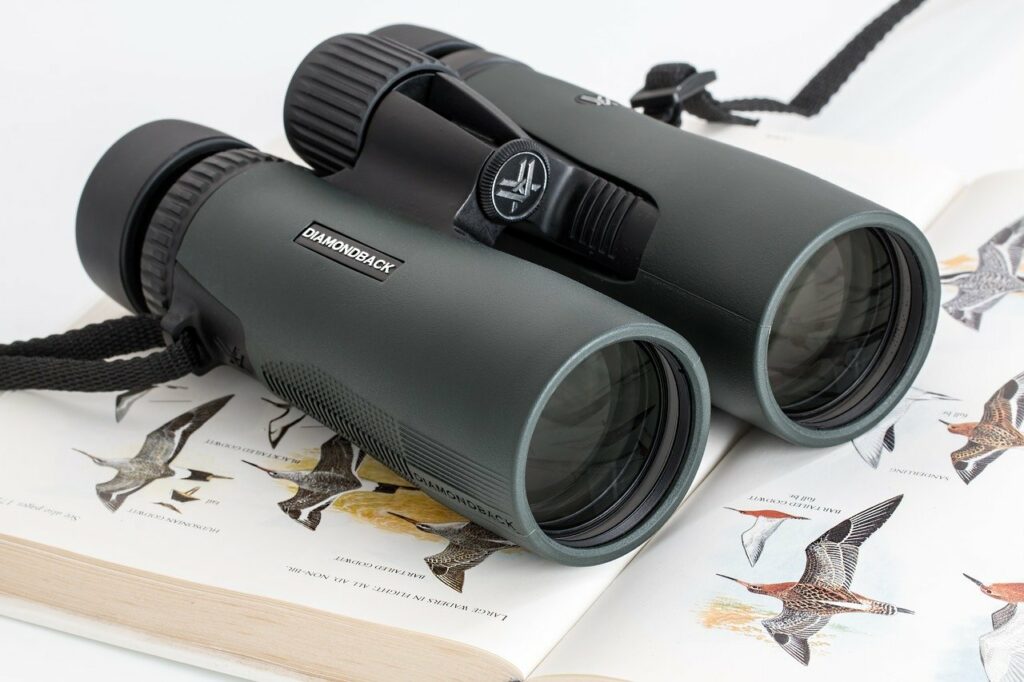 The continued involvement in the optics business and regular communications with several manufacturers convinced Daniel and Margie to buy binoculars in large volume and market it to other businesses. To further expand the business, they created their very own optics business, called Eagle Optics, which produced and sold binoculars produced in other countries under the Eagle Optics brand.

This part of the business advised overseas manufacturers on which features had high demand among consumers shopping at Wild Birds Unlimited's whopping 300 stores. The success in reselling optics equipment laid the foundation of their own brand in optics. While Margie managed the retail store business, Daniel along with some of his key staff worked on creating a new business, which they eventually did in 2002 by the name of Vortex Optics. The company also maintained close ties with Shelter Wings in the beginning.

Transition to other products

Although they kept their focus to the manufacturing of binoculars in the beginning, Vortex Optics gradually transitioned to other sport optics products over the years, including rifle scopes, range finders and spotting scopes. It was not much later that the company became one of the best optics manufacturer in the world after starting their operations 18 years ago. Partial credit of their success in the optics market goes to their VIP warranty and after sales services, which means a lifetime warranty for most of their products. Due to the sensitivity, most optics devices are prone to damage if exposed to unwanted conditions, therefore, a lifetime warranty attracts a large number of hunters and birdwatchers to the stores of Vortex Optics. 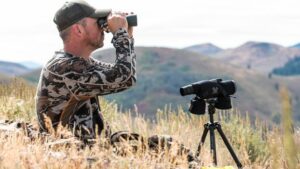 The headquarters of Vortex Optics is still located in the state of Wisconsin in the USA but employees in Wisconsin only oversee the management of design, marketing, sales and supply chain operations. The office was situated in Madisonn, WI until 2018 when the owner Dan C. Hamilton transferred the headoffice to a business park in Barneveld, a small village in Iowa County in the state of Wisconsin. The switch was inspired by an expansion in the US manufacturing operations of riflescopes, binoculars and rangefinders.

Initially, Dan was eyeing an area of 10 to 15 acres in the village's business park in 2013 but today, the company owns nearly all of the 150 acre area in the park. Actual headoffice and the manufacturing facility cover a staggering 280,000 square feet area. The remaining area includes a product showroom, two indoor-shooting ranges and a combined daycare and preschool center which spans at over 12,000 square feet. The Barneveld office has a workforce of around 300 skilled employees.

The employees occupied several small buildings in the previous Madison location and relocating all of them was not an easy task, recalls Shamus Terry, Manager of Sales. The large factory area at the new location allowed the designers to create wide open offices that serves to boost employee morale and interdepartmental communications. In addition to regular business operations, the new factory mainly focuses on the manufacturing of riflescopes.

The manufacturing of individual components and their assemblies of most Vortex products, especially binoculars, takes place at a number of locations in Asia, mainly in Japan, Philippines, China, Taiwan and Korea. Although there were plans to start production of binoculars at the Barneveld factory, currently all binoculars models are manufactured overseas. Daniel Hamilton and his son Sam, a design engineer, often travel to key factory locations in above countries to oversee the manufacturing operations and maintain effective relationships with their suppliers.

Vortex is actively taking part in the rise of optics production in China. As of now, nearly half of the products in Vortex's portfolio are produced in Chinese industries. Some of the factories are overseen and managed by Japanese optics experts to ensure consistent quality in all product categories. Current Chinese-manufactured products are Vortex Copperhead, Crossfire and Crossfire II, Strike Eagle, Diamondback scopes, and Diamondback Tactical riflescopes.

At the moment, Vortex Optics offers the following series of binoculars.

Razor UHD series are the top-of-the-line category of binoculars from Vortex Optics. As the name suggests, the binoculars provide unparalleled ultra-high-definition images with the use of high-quality optics. They are also one of the few non-European binoculars to feature the Abbe–Koenig roof prisms, which are known for improved light transmission compared to other types.

The Razor UHD series are manufactured and assembled in Japan and are the most expensive of all binoculars offered by Vortex. They are available in the following configurations: 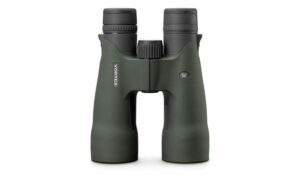 Like the UHD models, the Razor HD binoculars are notable among a multitude of users due to their high-optical performance and a robust, lightweight construction.

The Razor HD series are manufactured and assembled in Japan, just like all the previous generations of Razor HD binoculars. These binoculars are available in the following configurations: 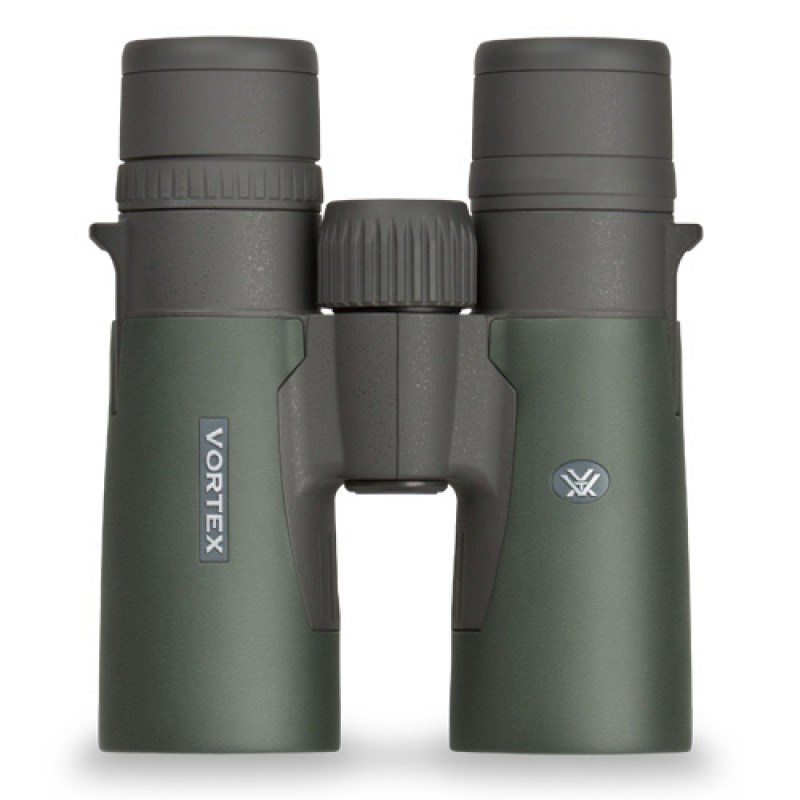 Manufactured and assembled in China, the Kaibab HD binoculars are known for their exceptional magnification power and large objective size which make these binoculars suitable for longe-range viewing. Mostly used by large-game hunters and law enforcement, these binoculars only come in the 18x56 configuration. 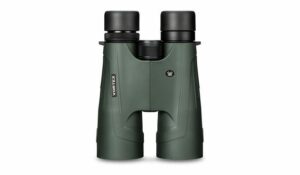 The Fury HD binoculars are the series of rangefinding binoculars from Vortex Optics. Specially designed for long-distance viewing, these binoculars feature high-class glass internals along with an embedded inclinometer, which provides efficient angles in addition to distance readings.

These rangefinding binoculars are manufactured in China and only come in the standard 10x42 configuration. Currently, the second generation is available, named Fury HD 5000 (the first generation was titled Fury HD). 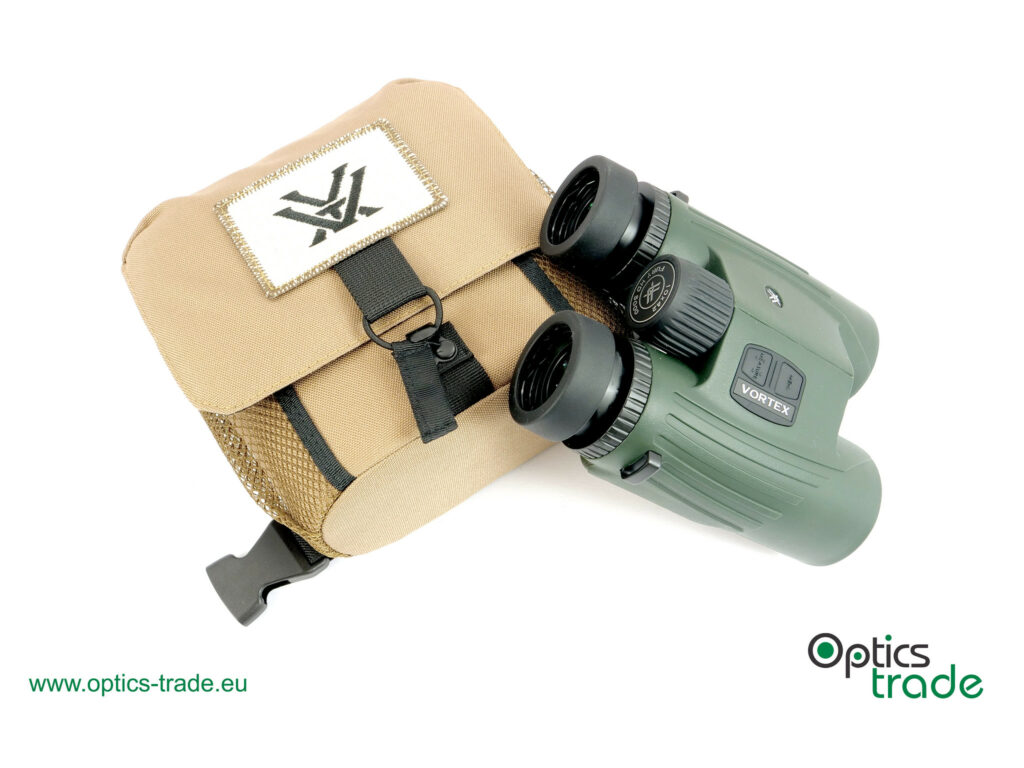 Unlike other high-end models, the Viper HD binoculars guarantee a premium viewing experience without costing an arm and a leg. HD low-dispersion glass lenses and XR anti-reflective coatings generate stunning bright images and a wide field of view, which are the reasons behind their popularity.

For those looking for budget-friendly binoculars, Vortex Diamondback HD binoculars provide a good value for money. With twisting eyecups, individual diopter settings and waterproofing capability, these binoculars serve as an affordable yet value-added entry point into the Vortex line-up. Diamondback HD series is available in a multitude of configurations, all of which are produced in China: 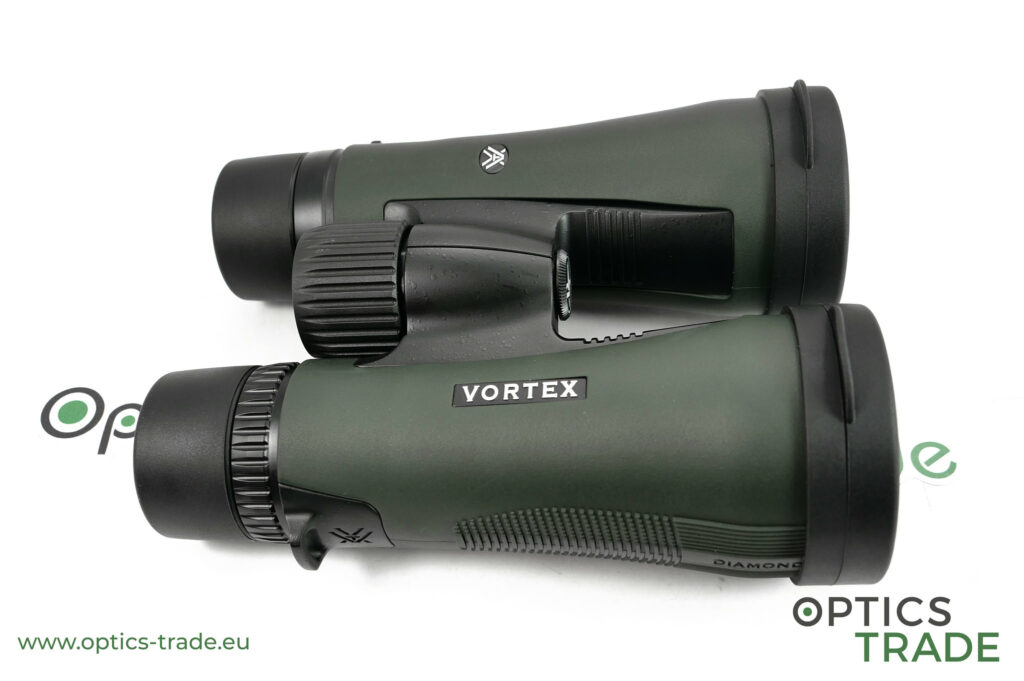 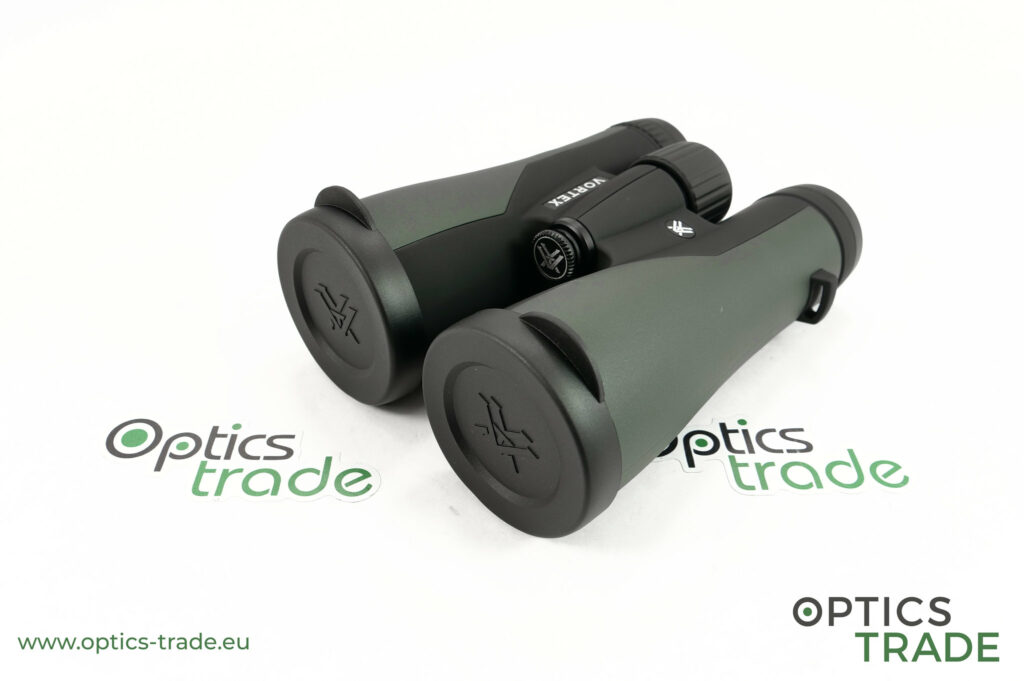 Unlike all other Vortex binoculars, the Raptor series feature the iconic Porro-prisms in an affordable package combined with a range of interpupillary distances. Being on the lower-end of the price spectrum, these binoculars lack protective coatings which may expose them to abrasion and scratches. They are also produced in China. Raptor series is available in the following two configurations:

The smallest devices on the list are the compact Vanquish binoculars, weighing less than a pound. Although they are designed to be ultra-portable with an objective size of 26mm, these binoculars feature a rubber armour and a generous field-of-view of 352 feet at 1000 yards, which is impressive at this price range. Both models of this series are produced in China.

Raptor series is available in the following configurations: 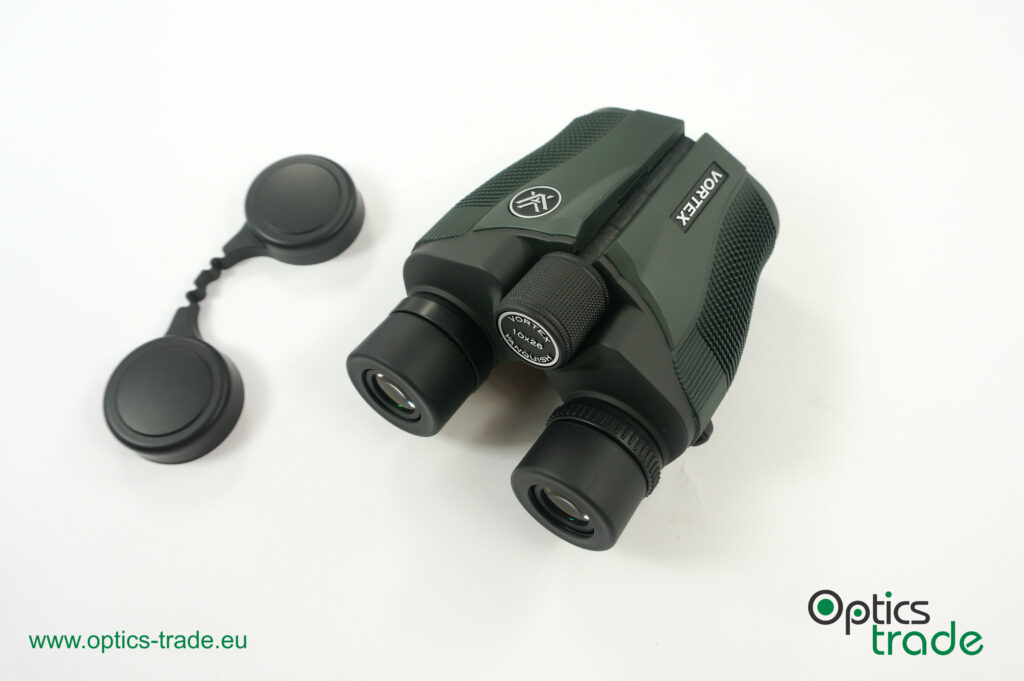 Vortex Optics is one of the largest manufacturers of sport optics products and its products are often considered at par with other premium optics brands. While many optics manufacturers originated in Europe, Vortex is headquartered in Wisconsin, United States. Established in 2002, it is also one of the youngest optics brands to become highly successful in the business in a short period of time.

The owners, Daniel and Margie, had an experience of working with a number of optics producers worldwide on binoculars and spotting scopes before they decided to introduce their own brand. Since they knew which features were liked by hunters and birdwatchers, Dan focused on perfecting them from the beginning which helped them to attain their current position in the market.

Today, Vortex offers a number of models in each device segment, ranging from binoculars, spotting scopes, rifle scopes, rangefinders to monoculars and red-dot sights. All premium, mid-range and affordable categories provide excellent value to the consumers at their designated prices. Vortex has achieved this feat by outsourcing the manufacturing of most of its product lines to countries with comparatively lower production and labour costs, like China, Japan and Philippines. The high-end models are produced in Japanese manufacturing sites whereas mid-range and affordable line of products are made in Philippines and China.

Vortex products were initially only manufactured in Japan since the Chinese optics industry lacked know-how and heritage. When Vortex shifted the manufacturing of its affordable models to Chinese production facilities, the quality of initial products was not up to the mark and the factories had to be overseen by Japanese engineers and optics experts. Gradually, the technology was developed, and Chinese workforce were trained to obtain higher optical performance and better build quality.

Today, most of the affordable Vortex binoculars and riflescopes are proudly manufactured in China. Daniel Hamilton and his son, Sam, visit all Asian factories from time to time to oversee the ongoing operations.

5 thoughts on “Where are Vortex binoculars made?”