Ever since the beginning of hunting, hunters’ weapons have been continuously replaced and improved, which extended the hunters’ effective range. Spears were replaced by bows and arrows and the latter were later replaced by fire weapons which remain in use until modern times.

Fire weapons would surely not remain a hunter’s weapon of choice for such a long time if they would not be improved constantly and the subject of the number of modernizations that improved the accuracy and effective range.

Constant improvement of fire weapons and especially shooting scopes extended the effective range of firearms to almost unthinkable levels. The sophistication of modern hunting rifles and shooting scopes reached such a high level that ethically acceptable shots (when it is still possible to assess that game animals should be taken out of nature despite the high distance) can be significantly longer than in the past. Nevertheless, overestimating your own skills when shooting long shots can lead to missed shots and wounded animals.

For this reason, we will present the fundamental laws of long-range shooting later in this article. Some readers will find some additional knowledge, but for all, it should bring a clear message that each long-range shot on an animal must be considered carefully. We are all familiar with irresponsible statements like: “I spotted a buck on 300 m and I just aimed a little bit higher…” Things are far from easy and not always ethically acceptable. The ethical code of Slovenian hunters bonds us to act responsibly when we are hunting and dealing with game animals.

External ballistics studies the behavior of non-propellant projectiles during the flight through the air. It is the most important factor of accuracy when it comes to long-range shots.

The red color on picture 1 shows the flight of the bullet through the air, the so-called bullets ballistic curve. During its flight through the air, the bullet is most affected by gravity force and air resistance force also called drag. Air resistance slows the bullet down, while gravity is aiming it towards the Earth. The ballistic curve is also affected by many other factors like weight and shape (aerodynamics or ballistic coefficient) of the bullet, muzzle velocity, angle of the shot, the rotation speed of the bullet, density, temperature, pressure, humidity of the air, altitude, speed, and the direction of wind…

Fortunately, there is no need to take most of these factors into account, except the wind and angle of the shot, when it comes to shots up to 400 m, and ethically acceptable shots when hunting are rarely longer. The first condition for accurate long-distance shooting is a precise understanding of the ballistic curve of a bullet or how much under the line of sight will the bullet drop at a certain distance. This is fairly easy for those hunters who are loading the ammunition by themselves. It is enough to measure muzzle velocity (appropriate devices are affordable and in wide use) and then use one of web available ballistic programs (calculators) to calculate the ballistic curve. For all others it is the easiest way to go on a shooting range and test the ballistic curve of their ammunition used in their own weapons.

Picture 2 shows how to determine the ballistic curve by shooting three shots in a group, each group at different distances, namely 100, 200, and 300 meters. By measuring the distance between groups of hits it is possible to determine bullet drop on those distances. Information about a bullet drop on certain distances is also available on ammunition packages provided by all manufacturers but considering many factors that can affect the accuracy it is recommended to test if data provided by the manufacturer is accurate. Discrepancies between provided and actual values are more frequent than their matching.

Once the ballistic curve of ammunition in a certain weapon is calculated, several methods of long-range shooting are possible.

A few words should also be dedicated to some myths or commonly known “truths” about long-range shooting. The most common myth is that faster bullets of smaller calibers are more appropriate for long-range shooting than slower, heavier, and larger diameter bullets. The truth is that more appropriate for long-range shooting are bullets with better ballistic coefficient and the ability to repeatedly score accurate groups of hits on all distances. The latter is usually not the case with fast bullets of smaller calibers, since they often lack accuracy. 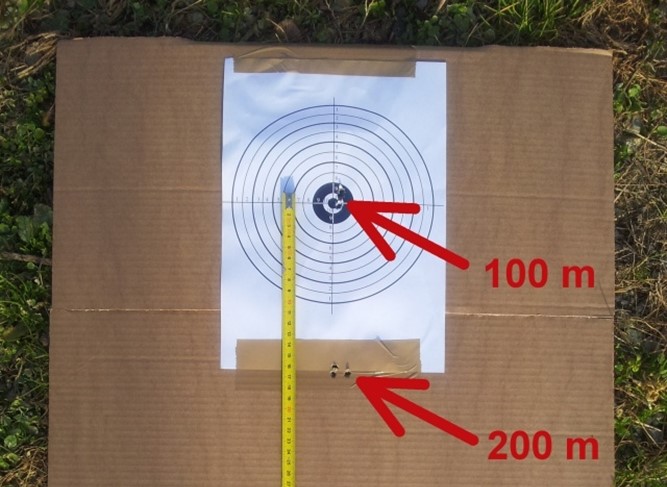