There are 3 options of reticle position in rifle scopes on the market:

(First) or Front Focal plane reticle position was a predominant rifle scope design in the past. Today, such reticle arrangement can only be found in tactical scopes and in a few classical European hunting scopes. The main feature of FFP reticles is their subtensions do not change with the magnification change. That means reticle subtensions in such scopes can be used for distance estimations or bullet drop compensation at any magnification setting. This is of paramount importance in tactical scenarios; thus, all real tactical scopes have FFP reticle placement. Usually, such scopes also have the clicks matched with reticle subtensions and are named MIL-MIL or MOA-MOA scopes. Another benefit of FFP reticles is the point of impact does not change with magnification change if you aim with other lines in the reticle.

Such rifle scopes are especially popular since their reticles are thin on higher magnification and offer greater precision. SFP reticles also have the advantage that, at low magnification, they are thicker compared to FFP reticles and easier to see. These two main benefits are the reason SFP rifle scopes gained such popularity.

There are, however, also some drawbacks of rifle scopes with such optical construction. Reticle subtensions change with the change of magnification, and because of that, distance calculations with the reticle are only possible at one specific magnification setting. Similarly, it is possible to use holdovers for correction of bullet drop only at one specific magnification, which makes this technique very difficult to use. The last, but minor, the drawback is that low-quality rifle scopes can have a shift of the point of impact with the magnification change.

Some rifle scopes (for example Docter Basic) have illuminated dot in the Second Focal Plane (SFP) and the reticle bars are located in First Focal Plane (FFP). This enables that on lower magnification settings the dot appears bigger on the target and the bars are thinner. Perfect for close range shots in stressful situations very common on driven hunts. However, on higher magnifications, the dot appears smaller on the target and the reticle bars thicker. This enables precise shots when aiming at greater distances. In tactical scopes, such reticle arrangement enables rapid target acquisition at 1 x magnification due to the bright and big red dot. At higher magnification reticle with hash marks can be used for holdovers. 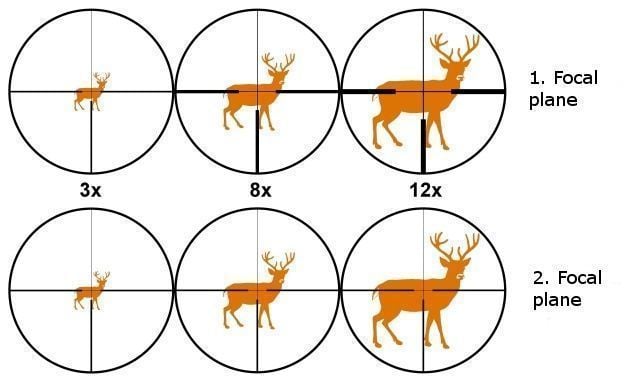