Since then the development came up with new generations, which worked also without an additional IR source. 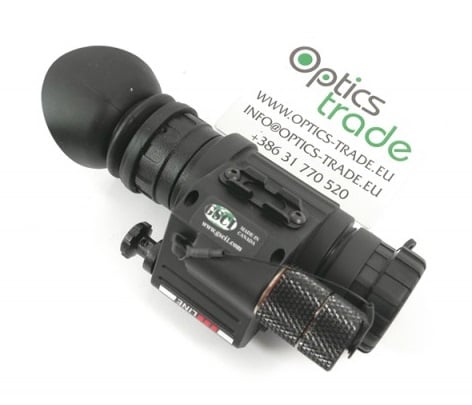 Night vision devices are divided into analog and digital devices. They work on a completely different principle, but both are designed to enable the user to see in the darkness.

Analog night vision devices are classified by generations, which also identifies how much the image intensifier tube amplifies the light of the environment. There are 4 night vision generations, and 3 of these generations are still available on the market.

The difference to digital night vision devices is that you see the image directly through the device without a screen. This means the device has no refresh rate, so the image is displayed in the normal time without any delay.

Digital and analog night vision devices are available in many different shapes and sizes, each designed for a different purpose:

Analog night vision devices are classified by generations, and these are available on the market:

The image color is normally black and green, but from the 2nd generation upwards, also better image intensifier tubes are available with white phosphor, which display a black and white picture. These IITs are normally more expensive, but give you better contrast and target recognition. The green image intensifier tubes are for most users more comfortable for the eyes. 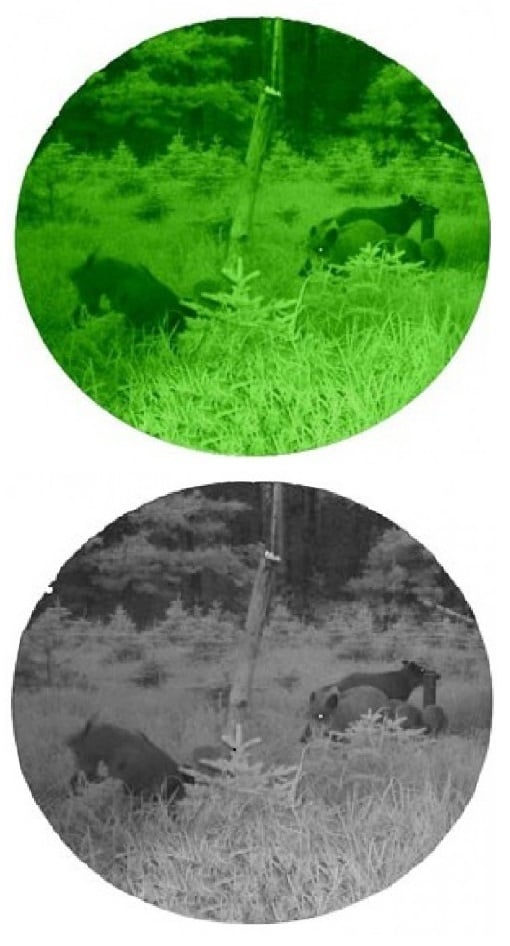 Generation 2 and 3 analog night vision devices have very good contrast and light amplification. The image looks real, and not like as you would look into a screen. Generation 3 rarely need an additional IR illuminator. Generation 2 devices do normally also not need one, except in complete darkness, or if you need to see great details on bigger distances.

Analog night vision devices are also not so sensitive for reflections, like water droplets or other. With a digital night vision, reflections can be very bright, and the details around are not possible to see. This can be very noticeable during the rain, or right after the rain.

For longer time observations analog devices are also a lot more comfortable to use because the image is not as bright as if you look into a small screen in a digital night vision device. The battery consumption is also extremely low since one small battery, like CR 123 or CR2, can last even up to 50 hours.

Another small drawback of these devices is that they don't have some special features like taking photos or videos, and they are very sensitive to bright light sources. If the device is turned on, on a bright sunny day, the image intensifier tube can easily get damaged. 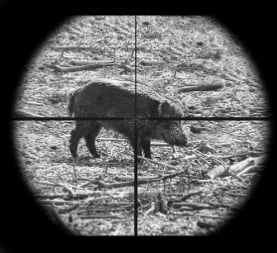 Digital night vision devices have also the advantage that they are a lot cheaper than Gen. 2 or even Gen. 3 NV devices. With the combination of a high-quality IR illuminator, the digital NV device can be very useful also on greater distances. In most cases, they perform even better than generation 1 night vision devices.

Compared to a Gen. 1 night vision device, the digital ones have the advantage that IR illuminators with long wavelengths can be used, which are completely invisible to all animals. For example, Gen. 1 NV devices see the IR light up to 760nm-780nm, and digital devices even up to 980nm. Many animals can detect light up to 850nm.

With digital night vision, the user is not forced to use only the fixed magnification, like with traditional analog NV devices. The magnification can be changed digitally, so the user gets better detail recognition. With bigger magnifications, whatsoever, the pixels are starting to get noticeably bigger, which often leads to worse details.

Digital night vision binoculars have one big advantage against analog devices – you can take photos and even videos. These can be easily sent to a smartphone or even a computer. Many manufacturers offer also a smartphone app, which can be used for adjusting the settings, downloading the photos and videos, etc. With an analog night vision device, none of this is possible.

Because digital night vision devices have a small screen and the image appears brighter, the user can get for e few seconds blinded after the usage. This is noticeable only in complete darkness because the eyes can not adjust so quickly from the bright image to the dark environment.

When looking into a reflecting target when the infrared illuminator is turned on, the image around that spot is mostly white, so it is very difficult, or not even possible to see any details. This can happen when it is raining, or right after the rain when the water is still on the plants.

The battery consumption is a lot higher than with an analog NV device, so the batteries are bigger and heavier. If you plan to use the device for many hours at once, an additional battery is needed.

An IR illuminator is a flashlight that emits light in an infrared spectrum, which is invisible to the human eye, but visible for night vision devices. IR illuminators are available in different wavelengths. The wavelength tells us, in combination with what kind of night vision they are designed to be used.

For analog night vision devices, only specific infrared illuminators work perfectly. Because of that, when buying an IR illuminator, you have to be cautious what is the maximal wavelength your NV can detect. If the emitted light of the IR illuminator is beyond the spectrum, it is invisible for such a device.

We recommend the following:

Digital night vision devices are not very picky when it comes to the right infrared illuminator. They can detect all wavelengths up to 950nm-980nm, depending on the manufacturer. This makes it a lot easier to decide which IR illuminator to buy, and there are many illuminators on the market, which are available for a low price.

It is also important to know, that unlike humans, some animals detect longer wavelengths of light. This means IR illuminators with a wavelength of 760nm-780nm can be, for them, well visible. For this reason, we recommend using IR illuminators over 850nm in combination with a digital night vision device.

A short presentation of NV Optics is available here.