In recent years we can observe a trend which has become widespread and global. It is driven by the NATO standardized rails, more commonly known as Picatinny rail standard. Picatinny being the New Jersey Arsenal who developed it in 1995.

This mounting is revolutionary. The biggest advantage being that the rail can be used its entire length and not bordered to a few pre designated slots like for example the Weaver rail standard was before. The other main advantage is the ease of use and interchangeability. If a product is meant for a Picatinny rail it will fit to all Picatinny rails, no matter the manufacturer or date of production.

The Picatinny rails are almost exclusively crafted from a single piece of metal. In this manor the axis of the Picatinny rail is perfectly straight and aligned with the axis of the firearm. Therefore the rifle scope which is mounted onto this kind of configuration is certainly aligned with the rifle and the trajectory of the ammunition. Weaver on the other hand is usually manufactured in two separate pieces, greatly increasing the possibilities for the axis to be crooked, overlapping and out of line. It is always harder to align two separate pieces to a third line than it is to align one piece to another. In this way, lapping of two mounting rings on a single piece Picatinny rail is no longer required. The single-piece rail will assure that both rings are perfectly aligned to each other and that no unwished stress is transferred to the riflescope.

The Picatinny rail itself is an evolutionary step forward from the older Weaver rails. The main difference is the spacing of the slots. Picatinny has them evenly placed exactly 5.23 mm one slot to the other, 3 mm deep. For this reason the mounting option is repeatable and the same with other firearms using the Picatinny standard. Interchangeability was a major driving force in the development of the new standard as different NATO armies need to be compatible with each other. Weaver rails have 3.8mm wide slots and these slots can be placed anywhere on the Weaver rail and in any number that producer wished. 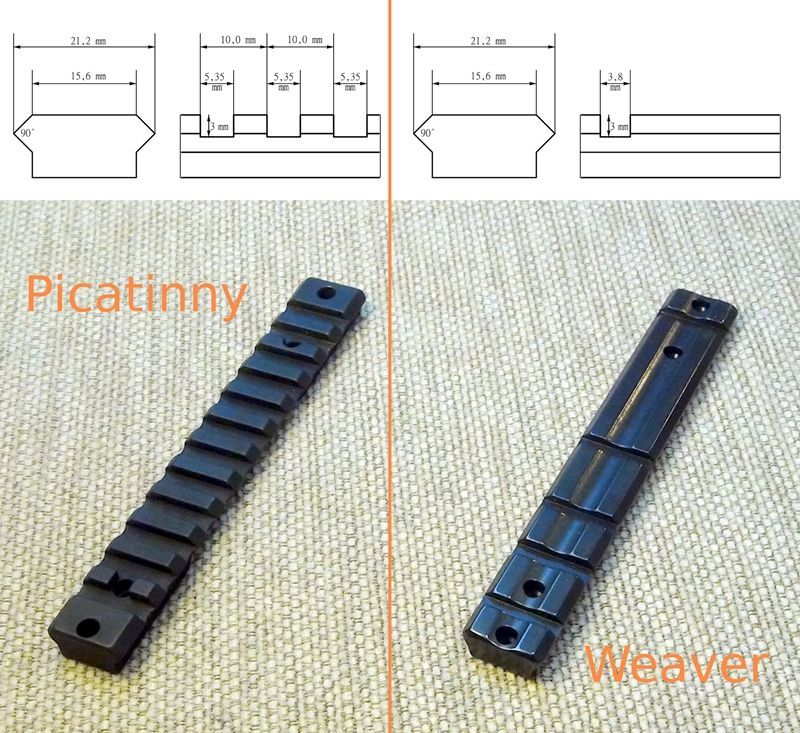 A big advantage for using the Picatinny rail is the ever-present recoil stop. Further more the manufacturing of the rails is not very technically demanding and can be done without the use of state-of-the-art machines which greatly reduces the cost of the finished product, making it very affordable. The Picatinny rails are easy to mount and usually this type of configuration does not transfer negative stresses and forces from the fired weapon to the rifle scope. In addition the Picatinny rail with is very long useable surface is ideal for mounting longer rifle scopes or to achieve the optimum eye relief. The durability and toughness is another big plus for this solution.

A majority of the Picatinny rings are fixed, but a number of mostly European manufacturers (EAW, MAK,..) have, in recent years, put a lot of effort into development of detachable rings with100% repeatability, with which it becomes easy to remove the scope from the weapon without the use of tools. No re-zeroing is needed with such mounts, but they tend to be expensive.

Picatinny and weaver share one more thing. It is possible to use Weaver rings and Picatinny rings on Picatinny rails, but it is usually impossible to use Picatinny rings on the Weaver base. The reason being the above mentioned positioning and spacing of the slots. Picatinny mounts have a 5mm recoil stop that goes into the rail slot and since weaver rails only have 3.8mm wide slots such rings do not fit on Weaver rails. Due to this reason the Picatinny rails are prevailing on the market in the recent years and eventually they will completely oust the Weaver rails from the market.