Scope mounts for Sako A7 M

Sako A7 is the result of Sako's aspiration to create a rifle that sits in the price range between premium Sako 85 and more affordable Tikka T3. It was introduced back in 2008. The A7 uses a detachable box magazine that holds a single-stack column of cartridges. The rifle comes in two action lengths; S and M and this naming is source of confusion, because S represents Short action (SA) and M represents Long action (LA). One of the advantages of different receiver lengths is improved rigidity of the receiver. The top of the action has 4 drilled holes for mounting purpose, rather than tapered dovetail, which Sako usually uses.

The same mounting surface can be found on Browning A-Bolt & Eurobolt; the only dimension that doesn’t match is the long distance between the holes (B dimension), which means two piece mounts from those two rifles will fit Sako A7 and vice-versa. One piece mounts, however aren’t interchangeable, because the B dimensions don’t match. 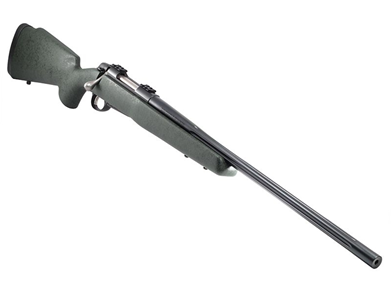 In long action length the A7 is available for:

The stock comes in 4 variants and all of them are injection moulded. The variants are:

All of them are available in both action lengths.

If you want to have fixed mounts, we recommend you to install Picatinny rails and then ring mounts on top of them.

It is ideal to place a Picatinny rail of the same material on the rifle receiver, because of the mechanical reasons.

More about that in our article:

The other option for fixed mounts are the ones, where rings are installed directly on the receiver.

We would like to emphasize that we don’t recommend installation of two-piece mounts unless installed by a gunsmith. The reason for that is that the two-piece mounts can be installed sideways, therefore the force will be exerted on the housing of the scope and bend it when the screws will be tightened, which will lead to shot inaccuracy. The scope will stay bent even after the screws are untightened and this will lead to voided warranty.

For detachable repeatable mounts we would recommend EAW pivot mount.

*We would like to stress that some mounts can be found that have the wrong dimensions between the holes for mounting and therefore will not fit Sako A7 rifles. A7 only accept mounts, which have the distance between the holes 84,8 mm (S) or 95,6 mm (M).

Talley Picatinny Base for Sako A7 LA