Anschutz 64 is a Bolt-Action Rimfire rifle, which is chambered in .22 LR caliber. Originally, rifle was developed for silhouette target shooting at the range of 100 meters. Anschutz 64 is designed in several different versions, such as: Anschutz MP, Anschutz L-MP, Anschutz MP-S and Anschutz MP-R. MP abbreviation stands for Multi Purpose – rifle. Rifle is designed with a heavy duty stainless steel barrel which is designed with 8 grooves. Anschutz 64 is designed with match 64 action. Barrel is 65 cm long, while overall rifle length is about 110 cm. This model aproximatelly weights about 4.1 kg. Magazine can hold the capacity of maximum 5 rounds. Anschutz 64 has 11 mm Dovetail designed for the mounting purpose. Note that the 11 mm Dovetail on this rifle is of round – type. Trigger is of two-stage type. This piece of firearm has various different stocks availiable. For example Benchrest adjustable stock, Standard stock with rubber butt plate. 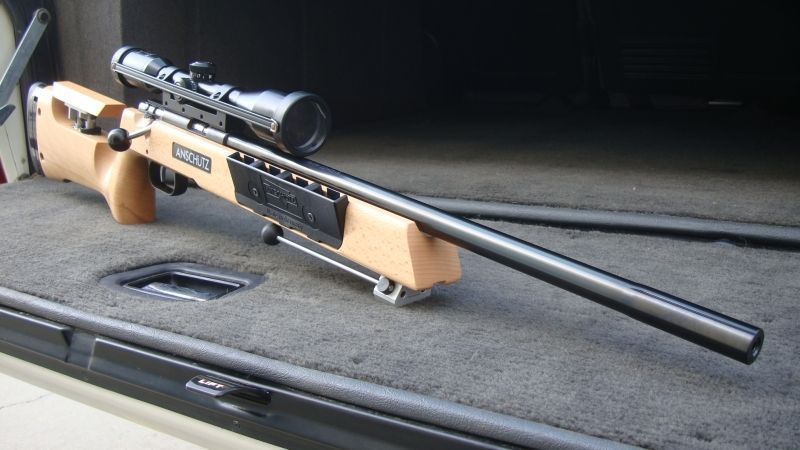 Fixed two-piece ring mounts cannot be detached from a rifle without the use of tools. They come at an affordable price and offer high reliability. Generally, they are not difficult to install on a rifle. Fixed means that the user cannot quickly detach and therefore switch scopes, which limits the usability of the rifle. Fixed ring mounts for Anschutz 64 are mostly produced in two fashions. A) direct rings with 11 mm clamps and B) advanced two part rings with separated base part, which clamps 11 mm Dovetail and ring which is attached to the base part. Simple rings are cheaper and easier to manufacture, while more advanced rings with separated ring and base part are more expensive, but usually offer a possibility to adjust scope's windage on the mount itself. Some manufacturers also produce one-piece Monoblock mounts for Anschutz 64.

We can group fixed ring mounts for Anschutz 64 in the following groups:

Detachable Rings mounts are designed with simple metal levers, which are used for quick remove from the rifle. These mounts straightforwardly clamp on the 11 mm Dovetail of Anschutz 54. Final position of the levers can usually be switched without the change of the clamping force on the Dovetail. This offers a posibillity to adjust the position of the levers for a better visual appeal (both levers pointing in the same direction), once the mount is positioned and fixed on the 11 mm Dovetail. Usually, Detachable Mounting options are designated as QR (quick release) or QD (quick detachable) abbreviations.