Barnard Precision started their Action and Custom Rifles manufacturing industry in 1993. Company was founded by Peter Barnard. Barnard Precision produces Custom Tactical, F class and Hunting rifles based on their own actions. They also produce a wide range of firearm accessories. The company is particularly specialized in the expertise of target shooting platforms. They „inherited“ a fashion of producing actions based on the Remington style actions. Barnard Precision uses Dolphin Modular, Joe West Laminate, Locally made F-Class and Hunting stocks for their rifles. Their most renowned and famous action is certainly an „S“ model, which is manufactured on the famous Remington 700 SA (Short Action) model.

Barnard Precision rifles which are manufactured on the „S“ model action are designed on the famous Remington 700 SA (Short Action) model. Action has three lug configurations, and is availiable only as single shot. „S“ model is made only for true left or right handed shooters. Barnard Precision „S“ is manufactured on the Remington 700 stock and trigger. Since rifle is entirely custom made, receiver is not drilled by default, but usually for the purpose of mounting a telescopic sight, customers normally want four drilled and tapped holes in the receiver. Two in the front and two at the back side of the receiver. These rifles are chambered in .223 Rem. and .308 Win. calibers. Barnard Precision rifles designed with „S“ action are: Barnard Precision „Joe West FTR“, „Dolphin FTR“, „Dolphin F-class“ and „Joe West F-class“. 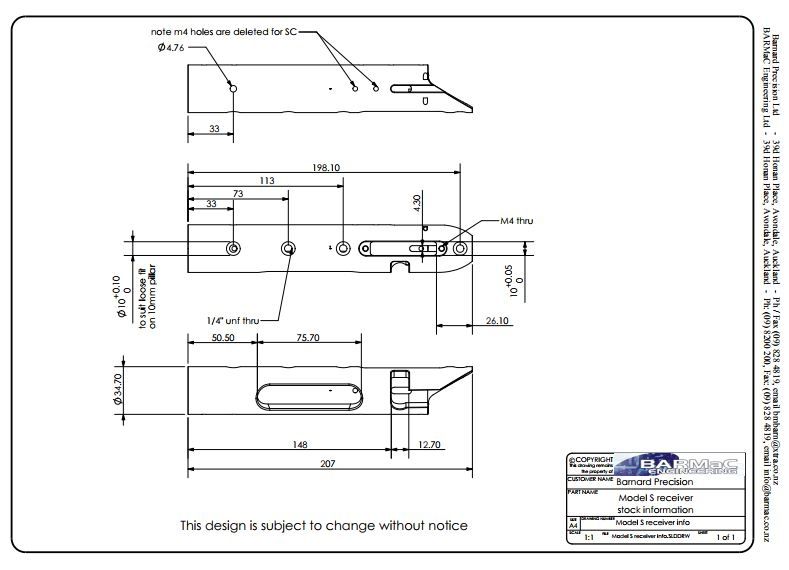 Fixed two-piece ring mounts cannot be detached from a rifle without the use of tools. They come at an affordable price and offer high reliability. Generally, they are not difficult to install on a rifle. Fixed means that the user cannot quickly detach and therefore switch scopes, which limits the usability of the rifle. Fixed ring mounts for Barnard Precision „S“ are mostly produced in two fashions. A) direct rings and B) advanced two part rings with separated base part, which is attached to Barnard Precision „S“ receiver and ring which is attached to the base part. Simple rings are cheaper and easier to manufacture, while more advanced rings with separated ring and base part are more expensive, but usually offer a possibility to adjust scope's windage on the mount itself. Some manufacturers also produce one-piece Monoblock mounts for Barnard Precision „S“.

We can group Two-Piece fixed ring mounts for Barnard Precision „S“ in the following groups:

For Barnard Precision „S“, Fixed One-Piece ring mounts are manufactured from Aluminium. Additionally, they are always availiable as one part design. Which means that the base and rings are aligned another. These mounts are more lighter than Tactical Monoblock mounts, more appealing and elegant.

Detachable Rings mounts are designed with simple metal levers, which are used for quick remove from the rifle. These mounts are attached to Bernard Precision „S“ receiver. Final position of the levers can usually be switched without the change of the clamping force. This offers a posibillity to adjust the position of the levers for a better visual appeal (both levers pointing in the same direction), once the mount is positioned and fixed on the rifle's receiver. Additionally, these mounts are designed with recoil groove and recoil lug. Some Detachable Ring Mounts for example EAW Mounts, offer windage adjustment. Usually, Detachable Mounting options are designated as QR (quick release) or QD (quick detachable) abbreviations.