First developed in their modern form in 1854, binoculars have been aiding travelers, astronomers, and hunters for over 150 years. Now, that they have become easily accessible, affordable, and efficient, people have found more uses for this engineering marvel than ever. Whether it is bird watching, hunting, mountaineering, camping, marine navigation, or surveillance, binoculars have become a must-have tool for everyone. While most optical instruments, such as riflescopes, spotting scopes, microscopes, telescopes, and digital cameras are capable of variable power, binoculars are mostly available in one fixed magnification.

Recent technological advancements have enabled opticians to manufacture highly sophisticated riflescope magnification systems at affordable prices. In addition, a variable magnification allows the hunters to target the game at multiple distances without having to get in close proximity. As a result, a vast majority of hunters have shifted from fixed-magnification riflescopes to variable-magnification ones for their hunting rifles. Therefore, riflescopes that are limited to one magnification are slowly disappearing from the market.

The situation for binoculars is quite the opposite. Almost all binoculars available today are of fixed magnification power and variable power is only rarely seen in binoculars. Some optics manufacturers have explored this domain and the resulting products are quite intriguing. One such example is the Leica Duovid binocular that can be set on two different magnifications.

While fixed power binoculars are denoted by 10×40 or 7×56 magnifications, zoom binoculars are usually marketed as 10-22×40 where 10 is the lowest magnification they can go, and 22 is the highest, with 40 mm being the objective lens. If you come across a pair of binoculars that is specified as 8-22×50 or 10-30×50, you can instantly identify it as variable magnification binocular. This labeling scheme was inspired by spotting scopes and riflescopes, both of which come with the zooming capability. 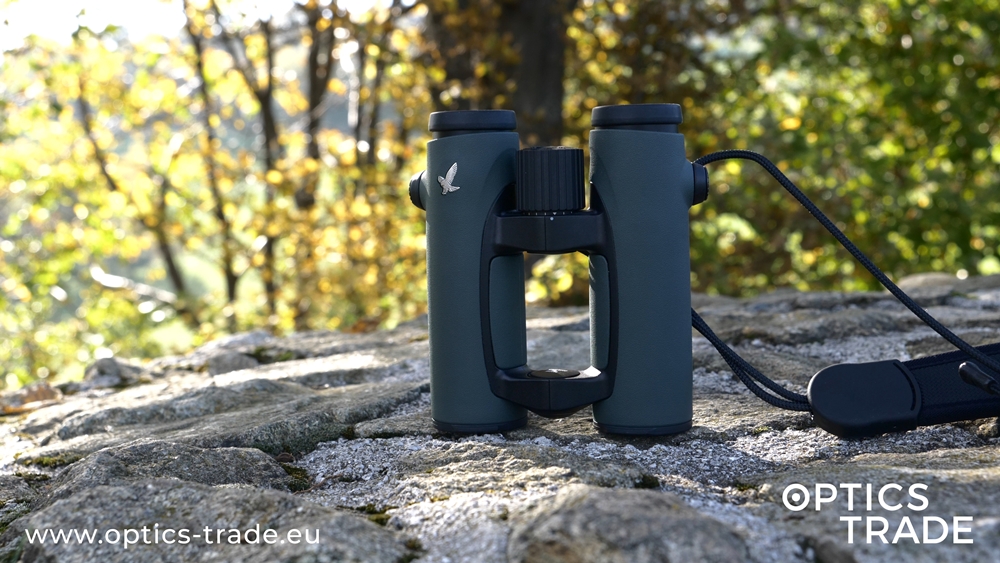 Zoom binoculars have the following benefits in addition to the variable magnification feature:

The zoom binoculars can be used in a number of activities that require variable magnification, such as bird watching, hunting, and tactical situations. With a fixed power, the user is limited to one magnification and if the object moves, the user will need to change his/her position in order to observe the object completely. This is especially true for bird watching and hunting since the movement of animals can be unpredictable and some of them are fast-moving species. To counter this problem, a quick zoom-in and zoom-out feature will enable the hunter to view animals at a higher or lower magnification.

Since the field of zoom binoculars is still under development, most optics manufacturers, except for one or two brands, offer zoom-enabled binoculars at affordable prices. This way, more people can get acquainted with the intriguing zoom feature and decide if multiple magnifications can be useful for them. 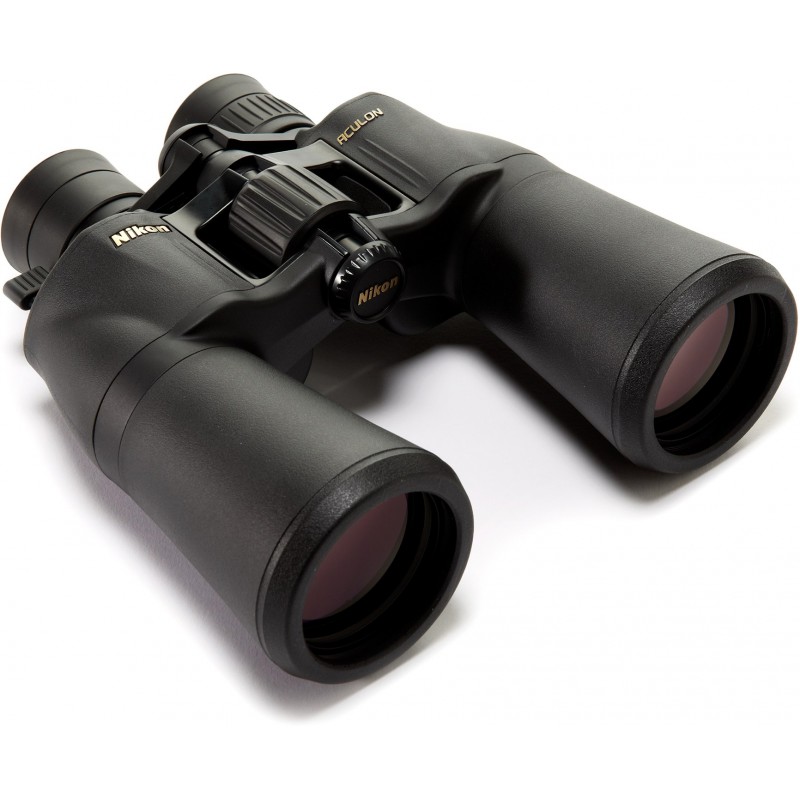 The zooming feature in binoculars comes with the following shortcomings:

Since zoom binoculars feature multiple optics elements and a complex zooming mechanism, they weigh relatively more than regular binoculars with a fixed magnification. Consider a scenario where you bought a set of 10-22×40 zoom binoculars. At times you might want to use them at 10x power, but you will always have to carry a weight equivalent to a pair of binos with 22x power. This reason makes it comparatively difficult to use zoom binoculars continuously for extended periods of time, especially when hunting, as hunters need to carry additional gear.

While the zooming feature is a great addition to binoculars, the reality is that most zoom binoculars available today do not offer the same quality as that of fixed magnification binoculars. Using a pair of zoom binoculars, the observer will experience images that are fuzzy and more toned down. Additionally, zoom binoculars often suffer from collimation issues since a perfect synchronization is difficult to maintain due to a complicated moving mechanism, which further deteriorates the image quality.

Zoom binoculars have several moveable elements inside the optical compartment. While they are necessary for the zooming capability, they limit the field of view significantly. A loss of up to 50 percent in FOV is something needed to be considered before choosing to buy a set of zoom binoculars. 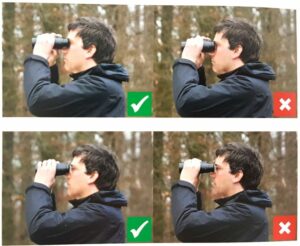 Therefore, images that are viewed through a set of zoom binoculars usually lack sufficient brightness and sharpness even in daylight. Therefore, binoculars with variable magnification cannot be effectively used during low-lighting conditions.

Similarly, fixed magnification binoculars have both positive and negative aspects to them.

While fixed magnification binoculars are limited to one magnification, they have several benefits over zoom binoculars in terms of optical performance which are hard to neglect given the purpose of binoculars.

A fixed power does not equal the end of the world for binocular users. Manufacturers have been producing binoculars with a fixed magnification for more than 150 years and there is no question that modern binoculars are the result of continuous innovation and research in the optics field. Spanning from affordable to premium models, these binoculars feature excellent optics and coatings which combine to produce outstanding images.

The eye relief in fixed magnification binoculars is comparatively longer than what is seen in zoom binoculars. Eye relief of 16mm or higher is generally considered to be a good number by eyeglass wearers. While this number was unachievable in the early days by optics manufacturers, the result of continuous technological advancements in the area has made this possible. Nowadays, even in the affordable category, many brands mention an eye relief longer than 16mm in webpages and catalogs of their products.

After years of research, experts in the field have cracked the formula for the right optics and coatings to enhance light transmission in binoculars. There is no question that the type of glass used for the manufacturing of prisms and lenses play an important role, but manufacturers have devised multiple nano-coatings in order to further improve the optical performance in binoculars. Together, the optics and coatings determine how binoculars will perform in low-light conditions. Popular coatings include SWAROTOP, Diamond-night, and T* coating from Swarovski, Steiner, and Zeiss respectively.

Since fixed magnification binoculars have fewer optical elements, users can experience the real effectiveness of the aforementioned advancements. 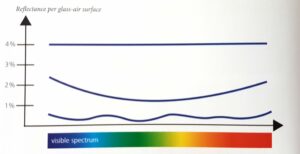 One of the many advantages of fixed magnification binoculars is the large field of view. After examining several pairs, experts have concluded that the FOV in fixed power binoculars is almost double to that of zoom binoculars.

Some disadvantages of fixed magnification binoculars are:

While these binoculars have a better FOV, it is unchangeable due to the absence of a zooming mechanism. Therefore, it is recommended to analyze your viewing requirement before buying a new pair of binos. Although the FOV is fixed, it is usually much larger than, and for some products it is up to 330/1000, which is more than enough for most users.

MARKET OFFERINGS IN BOTH CATEGORIES

Zoom binoculars available today are usually of low quality. Optics experts are still exploring the domain of zoom binoculars and there is a lot of room for improvement in this area. One popular example of zoom binoculars are Duovid binoculars from Leica, where the highest quality of optical and mechanical elements are combined in order to provide the perfect double-magnification experience. Other products include Nikon Aculon, Bushnell Legacy WP, Celestron Upclose G2, Braun Standard Porro, Levenhuk Atom Zoom, and SoB Super Binoculars. Most of these devices feature Porro prisms, which makes them comparatively bulky and heavy than the Leica Duovid.

The lack of interest and development in this domain stems from the lack of demand from the population. Most users are satisfied with their non-zoom binoculars, therefore they do not see the need to upgrade just for the zooming capability. This leaves the future of zoom binoculars in a shaky situation. For zooming, users always have the option of spotting scopes, which have also gained popularity in recent years.

Since there is a small demand, the only brands that manufacture zoom binoculars are the affordable ones, which keeps the prices of these binoculars low.