Why are binoculars filled with Nitrogen?

Binoculars are designed to be used for bird-watching, camping, and other outdoor activities but a little careless attitude can result in dust, moisture, and spores in the lens compartment. Optical devices are always prone to moisture contamination because as soon as they are exposed to sudden temperature changes, water molecules in the air immediately start depositing on the surface of the glass, whether it is your prescription eyeglasses, a telescope or a pair of binoculars.

While it is easy to wipe off some fog from your glasses, the case with binoculars is relatively complicated. Binoculars are developed to be used in the outside environment, colder temperatures and/or humid climatic conditions condense the water vapour present inside the optical housing and deposit it on the internal surfaces of the eye-piece and objective lens of binoculars, negatively affecting their optical performance. Since binoculars are not DIY-friendly, most users will have difficulty returning the device to its original condition. Such binoculars are rarely sent for repairs and their condition worsens over time up to a point when they are usually either recycled or dismantled for fun. 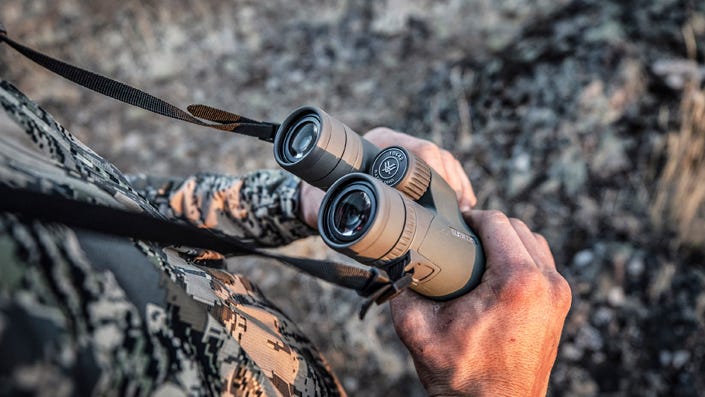 Though moisture alone can do some serious damage to your beloved equipment, dirt, and manufacturing residue on the inside of the optical housing share equal blame. Numerous scientific studies have been carried out by optical experts around the world to find solutions for getting rid of frequent binocular damage complaints and they managed to find some interesting solutions.

The culprit on work here is Air, which is the ultimate carrier for everything. It carries moisture, dust, pollen grains, bacteria, and viruses and numerous other particles that can contaminate the insides of a piece of binocular. The Oxygen present in the air is also known for reacting with the optics housing materials at higher temperatures.

All solutions would circle around purging the air out from the binocular barrels. The ideal answer would be to vacuum out whatever air content and dust elements are inside the barrels of binoculars, and put a tight rubber seal on all glass – plastic interfaces and jousting joints. Although it is perfect, the costs for designing and developing such an optical instrument for the masses would be obscene along with the practicality of such a device.

The next best solution is to replace the air with something that does not share its properties and abundantly available for cost optimization purposes. In 1973, Steiner Optics, a German optics manufacturer, came up with the idea of purging the binoculars with Nitrogen to effectively “fog-proof” the device. Nitrogen molecules would replace the air content present inside the barrels under high pressure, thereby, eliminating the possibility of fogging and contamination of binocular lenses in the future. Though initially designed for armed forces because of their durability, Nitrogen-purged binoculars became an instant hit among hunters and plane spotters alike. In the early 1990s, optics manufacturers like Steiner and others slowly rolled out this feature in their pricier high-end models.

Nowadays, thanks to continuous technological advancement, almost all modern binoculars come filled with Nitrogen because it is cheaper to harvest directly from the air. Only knock-offs or dirt-cheap binoculars lack this amazing feature. If someone is serious about plane-spotting, camping, or some other hobby, they will always invest in a quality device, which will not only last longer, but the view through their eyepieces would be of the best quality. 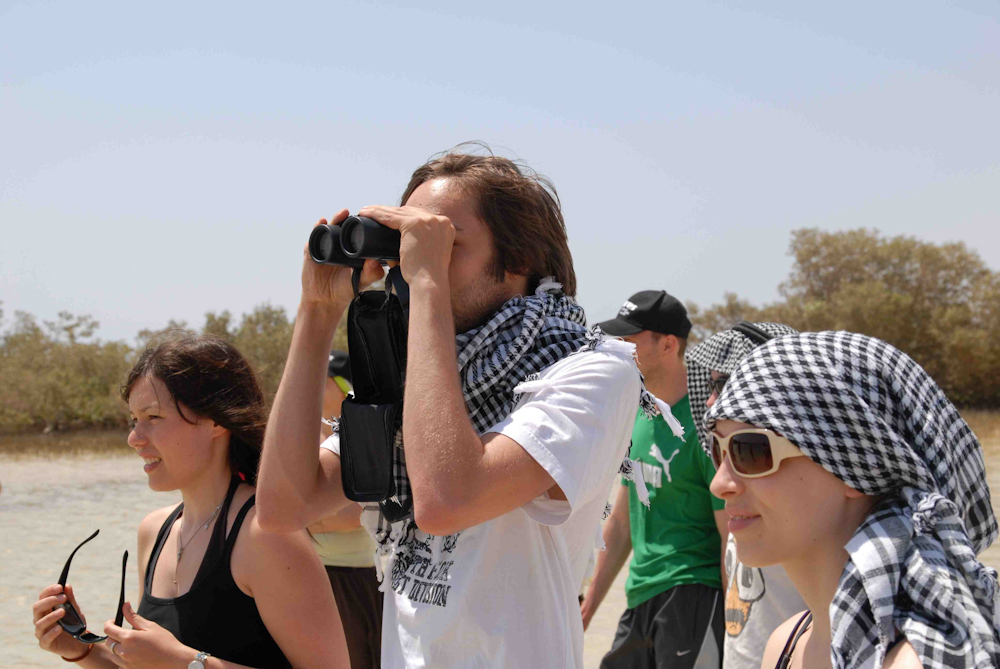 Advantages of binoculars filled with Nitrogen

Binocular that makes use of Nitrogen or other gases for removing moisture content and dust particles from the lens compartment to minimize the possibility of lens fogging are called fog-proof binoculars. Some benefits of Nitrogen-urged binoculars areas under:

The first and foremost advantage of filling binoculars with Nitrogen is that the internals of the equipment remain absolutely dry. Since there is a total absence of air and moisture content inside the cavity, there is no need to be vigilant when using the binoculars in damp places and frequent temperature variations. Sealed binoculars give a sense of security and confidence to the observer and he can focus more easily without having to worry about water droplets forming obstructing their view.

A confined space with low light, lots of Oxygen, and moist atmosphere are the right favorable conditions for the development of fungus and mold, which can take anywhere from a few hours to a week to fully grow. They have a branch-like appearance which generally originates from a center. If an optical device, such as a binocular gets affected with fungus or mold, little to nothing can be done to reverse the damage and that binocular is either recycled or dismantled for fun.

While the fungus can be cleaned off with a diluted hydrogen peroxide solution, Fungi are known for secreting enzymes that can chemically alter the surface they are attached to, which is usually the lenses in the case of binoculars. The chemicals present in the enzymes frequently etch the surface of the glass, which then requires repolishing. If not done properly, repolishing the lenses can cause irreversible damage.

Nitrogen-purging gets rid of two of the four requirements of their growth, effectively eliminating the chances of any kind of fungal development.

Nitrogen gas comprises 78.09% of the earth’s atmosphere but there is an underlying reason for this. Oxygen which constitutes 20.95%, although essential for respiration, is a highly reactive gas that reacts with anything it comes in contact with, and Nitrogen, which is fairly unreactive due to its triple covalent bond between its atoms, acts as an inhibitor for those possible reactions to a certain degree. Likewise, at slightly higher temperatures, Nitrogen does not interact with or temper the binocular housing materials as well as the multi-coated lenses.

Gases that have the characteristic of absorbing and trapping heat energy for longer periods of time are known as greenhouse gases. Although Oxygen present in the air is inherently not a greenhouse gas, the remaining constituents of air, including water vapour and carbon dioxide, are considered to be the chief greenhouse gases. Thus, the air inside conventional binoculars has a potential of trapping heat inside the binocular housing during prolonged use which can be detrimental to the lenses as well as the casing.

Nitrogen, on the other hand, does not have greenhouse properties so if it replaces the air present inside the housing under high pressure, there is little to no possibility of binocular wear and tear due to excessive heat. As a result, Nitrogen-purged binoculars can be used in places with hot climatic conditions for long periods and are ideal companions for outing and picnicking.

Waterproofness and nitrogen filling are mutual

Since tight rubber seals are used around lens-housing interfaces to keep pressurized Nitrogen from slowly leaking out of the optical compartment, similarly it is impossible for anything to go inside the housing, especially moisture and dirt particles, let alone another gas. Therefore, any binocular that is marketed as fog-proof is always additionally labeled to have a waterproof rating. If a binocular package says fog-proof only, there is a good chance that specific might be a knock-off.

One property that makes Nitrogen highly suitable for purging optical devices, such as binoculars, telescopes, rifle-scopes, and camera lenses is its colourlessness. This claim can be demonstrated by a simple experiment. Air is already 78% Nitrogen, and if it had an effect on eye-vision, none of us would be able to see anything clearly. In the same way, there is no apparent gain or loss in the optical characteristics of Nitrogen-purged binoculars.

In addition, Nitrogen has a nearly identical refractive index (1.000281) to that of air (1.0003), therefore, it does not affect the trajectory of light rays passing through the objective lens towards the eyepiece lens. Consequently, optical performance is not affected. Even at higher temperatures, there is no advantage of using Nitrogen or any filler other gas from a strict optical point of view, apart from the fact that lenses do not fog which allows the observer to see crystal clear objects. 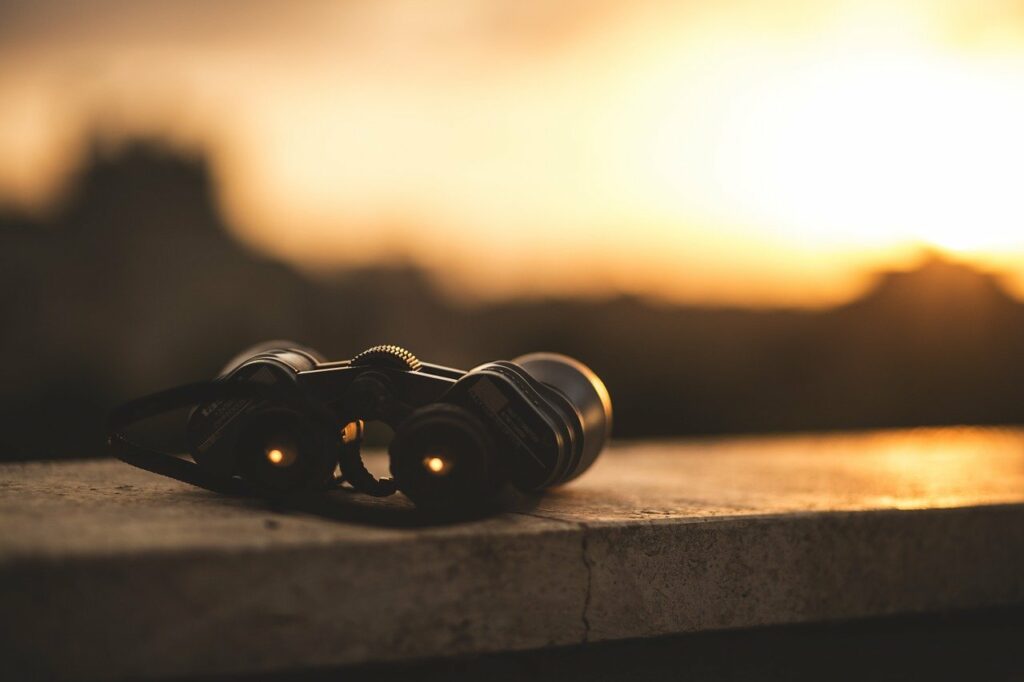 Air is comprised of water vapour, microorganisms, such as bacteria, dust, pollen grains, and other minuscule particles which can contaminate the insides of optical compartments of expensive equipment if not used carefully.

The most common problem caused by these elements is lens fog. For example, take a pair of eyeglasses and enter a place with high humidity. Water vapours in the humid air will instantly condense on the surface of lenses. Since it is possible to reach both surfaces of the lenses, the moisture on the glass can easily be wiped off with a microfiber cloth. But the same level of cleanliness cannot be achieved in the case of binocular. While the external surface can be cleaned before use, the internal surfaces of the lenses are impossible to reach by a random user, even someone with basic DIY skills as they might disturb the alignment of the telescope barrels during disassembly.

The key to prolonging the life and freedom of use of binoculars is to keep the internal components of the binoculars completely dry. In the early 1970s, a German optics manufacturer came up with the idea of purging the optical compartments of binoculars with Nitrogen under pressure to prevent internal fogging or misting of binoculars. After successful experiments, mass production of pressurized binoculars started in the 1990s.

Being an inert gas, Nitrogen does not retain water particles and does not unnecessarily react with surrounding elements even under fairly extreme conditions. It is abundantly available in the earth’s atmosphere, making the harvesting process significantly cheaper. As a result, nitrogen-purged binoculars are affordable to everyone. It also gives the freedom of using an optical device in a way that is comfortable without having to worry about humid weather. In addition, it prevents the development of fungus inside the optical housing, which plays a huge role in prolonging the life of the optics. These are some of the reasons they became an instant hit among the masses.

Argon is also reportedly used in the place of Nitrogen to fog-proof binoculars because of its slightly larger atoms than Nitrogen. No matter how highly pressurized and tight the seals are, gases always start leaking from pressurized containers after an unpredicted duration. In the case of imminent leakage, Argon atoms will leave through the opening significantly slower than Nitrogen molecules, thus keeping the binoculars water and fog-resistant for a longer time. Regardless of the gas used, there is absolutely no optical gain by using pressurized gas apart from preventing the optical compartments from moisture and dirt contamination.

In order to have the best viewing experience and a long-lasting travel companion, it is recommended to choose Nitrogen-purged binoculars for your adventures.