On the 7th of November, the Optics-trade team went to the shooting range near Slovenska Bistrica to do an in-the-field comparison of 8 IR-illuminators. The shooting range is located a few kilometers away from our headquarters.

We placed the signs – targets – in two rows, the first row 65 m and the second row 70 m away from us. They were put on a steep bank so that a clear reflection could be observed when pointing the beam at each target. The signs had to be placed at an adequate distance one from the other so that the beams of illuminators would not overlap. This was only partly achieved because we had limited space.

The preparation for the test took place during the day. The test, however, was filmed when it got dark. We also kept in mind to do it during the new moon phase and away from all the artificial light sources so that optimal results could be acquired.

These are the infrared illuminators that we put to the test:

The three-digit numbers starting with ‘8’ or ‘9’ stand for the wavelength of light that the illuminator emits.

These illuminators are powered either by an LED or a laser. Pulsar AL-915 IR, Dipol L2 850, Ados Tech/ElectroOptik IR-530 and Laserluchs LA PRO II are powered by a laser, while the other four use an LED as a light emitting source.

Wanto to know more about LED and Laser illuminators? Check them out below

Which provides the best IR light: LED or Laser based?

It is difficult to say which light emitting source is better since other factors such as build quality have to be taken into account. In theory, a laser should be better as it emits light in a far narrower spectrum.

What IR wavelength is best for Night Vision?

For example, a laser-powered infrared illuminator where the number '850' denotes the wavelength of the light that it emits, will emit light from, let's say, 845 to 855 nm of wavelength, whereas, while using an LED-powered illuminator with the same wavelength specifications, it can happen that light emitted is in a wider spectrum, namely from 800 to 900 nm.

The analog night vision devices that we used were Jahnke 1x56 gen 2+, two Dipols DN 55XT gen 2+ – both clip-ons, one with a green and the other one with a white photocathode – and Pulsar Challenger GS, a monocular.

Pulsar Digiforce 860RT monocular and Forward F135 clip-on comprised the selection of digital night vision devices that we included for the testing.

Basically, we wanted to see which combo is better:

Often asked questions when it comes to illuminators:

These questions are best answered through a field test, which is another reason we chose to do this test. Furthermore, we wanted to see to what degree do more expensive night vision optics perform better in conjunction with the illuminators than cheaper night vision optics.

Problems during the test

We faced some problems when doing the test:

These devices are sensitive to light and can easily get damaged, which is why we had some problems setting the camera correctly as we had to point the flashlight's beam of light away from these devices and set it to the lowest possible setting. It was quite cold outside, so our hands were freezing.

Because we had limited space and filmed the test in a narrow passage, the light beams of certain illuminators overlapped with the beams of others. Also, we had to clear the terrain of several bushes and branches before doing the test.

Finally, we had major problems with adjusting the sharpness of the video clips – we had to adjust the focus of each night vision device, the focus of the riflescope on which the NV device was mounted, and lastly, the focus of the camera lens – not to mention the additional problems that came with the dark.

It is a common misconception that if one owns a high-quality NVD device, the illuminator is of little importance. Even if you own one of the best gen 2+ analog night vision devices available such as Jahnke 1x56 Hypergen, its performance will suffer without a proper illuminator.

Saving money on an illuminator is thus one of the biggest mistakes a user of an NVD can make. The quality of the illuminator is especially important if you have an affordable night vision device.

Up to a point, that is true, but some additional explaining is required. Pulsar makes affordable, entry-level illuminators, which perform very decently for the price. Their disadvantage is the housing which is made from plastic. Also, one cannot focus the beam as well as with some other, more expensive illuminators (on the latter, a very focused beam can be set whereas Pulsar illuminators’ beams cover up the entire field of view and cannot be finely focused).

Expensive, high-quality illuminators made by Jahnke and Laserluchs are better built (made of metal), more robust, and perform better. The most notable advantages that expensive illuminators have over the more affordable ones are the possibility to focus the beam better, sharp beam edges, and usually, a simpler solution for the intensity regulation.

What surprised us the most is how well the illuminator by Ados Tech performed. Even though it is available at quite a lower price than Laserluchs and Jahnke, it was extremely effective. Its only downsides are the big, bulky appearance and 3 available intensity levels (there could have been more). Another pleasant surprise was the entry-level Pulsar X850 which performed outstandingly.

Focus on Illuminator is important

We also learned that focus on an illuminator is of great importance, especially if you plan on using your illuminators at longer distances. The only illuminator we tested that did not have the option of focusing was Jahnke Phönix 5. We concluded that the illuminators which lack focus work well only in specific situations – at short distances, for example.

Adjusting the beam direction is a must on longer distances

The manufacturers are implementing this feature in two ways:

Pulsar and Dipol use the second solution but in different manners. On Pulsar illuminators, unscrewing a rotating ring near the front of the device will allow you to move the hood in all directions, pointing the beam in whichever direction you see fit.

Dipol uses a technique that is identical to the one we see on riflescopes – there are two adjustments ‘turrets’ with which you can set the beam in the desired direction.

If the ability to adjust the beam direction and focus is especially useful at longer distances, the importance of having the possibility to adjust illumination intensity will be noted at shorter distances. Illuminators without this option use a single setting which is, in most cases, far too bright for observing objects up to 50 m away.

From our experience, the former solution is better since it allows the user to set the illumination much more precisely. With Laserluchs, setting the intensity is not possible without a dimmer which must be bought extra. Since this accessory is much needed, purchasing it is recommended.

This is because these illuminators are powered by an LED which emits light from a wider spectrum. We inferred that some of the light emitted is of the wavelength still detectable by analog night vision – with Pulsar AL-915, for example, we did not detect a rectangular beam but a single line.

Now, a word or two about the Pulsar AL-915 IR illuminators which emit light in the shape of a rectangle. There are two models in this series:

The letter ‘T’ designates that the model is suitable for mounting on top, while the model that lacks this letter is an appropriate choice if you have a mounting surface on the side of your device. These illuminators work best with digital night vision devices that have a rectangular screen and a rectangular sensor since the entire field of view will be illuminated.

To sum up, let’s point out a few important facts concerning each of the illuminators that we tested.

Jahnke Phönix 5 Ultra lacks focus, which makes it suitable only for specific uses, namely for short distances up to 50 m. From 50 m onwards, Jahnke Phönix Focus 875 is a better choice.

With both these illuminators, the build quality is superb. They emit light with a wavelength of 875 nm, which makes them suitable for digital and analog night vision devices. Additionally, the user is invisible from the game since this wavelength is outside of their visible spectrum.

The Laserluchs illuminator performed outstandingly well. The build quality is also very good. The disadvantage is the lack of intensity regulation, which can be added by purchasing a suitable dimmer. If you plan on using the device at distances longer than 50 m, this extra purchase is a must.

The 940 IR model worked best with digital night vision devices, with analog not so well (it emits light with a wavelength of 940 nm, so this was expected).

This model has since been discontinued.

The Pulsar X850 infrared - illuminator was, perhaps, the biggest surprise out of the three. It worked well with both analog and digital night vision devices. It emits an unusually strong beam of light. There were some disadvantages – the border of the beam was not as sharply defined as it could be, and we could not adjust the focus the way we wanted (the beam emitted was very wide even at max. focus).

All in all, we would still list this as one of the best buys considering its price/performance ratio.

The Dipol L2 850’s advantages are its small size and weight, zeroing system and beam adjustment. Unfortunately, we were not happy with its performance. However, Dipol discontinued this product and will launch a new version soon. If they manage to improve its performance, this illuminator will surely become a hit.

The Ados Tech illuminator is by far the most powerful of the devices that we tested. After the test, we tried pointing it to a distance of 300 m and it still worked like a charm. This is amazing considering that it costs less than Jahnke and Laserluchs IR illuminators. Its disadvantage is that it is big and bulky.

Stay tuned for more of our tests. 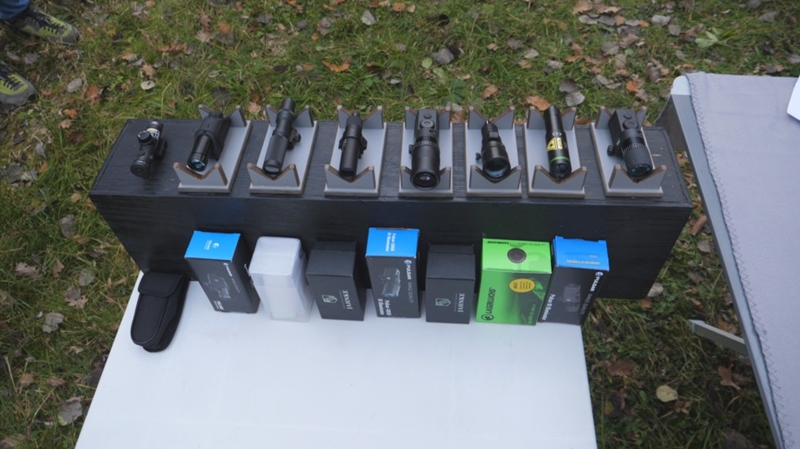