This blog post will compare the Pulsar Axion 2 XQ35 and Axion 2 XG35 devices. Although similar, these two thermal monoculars have some notable differences.

When comparing the devices on the outside, the only difference between the Axion XQ35 and the Axion XG35 is that one has a blue sticker, while the other has a red sticker. On the outside, both devices seem identical, but what about on the inside? What sets these two devices apart from one another?

Let’s start with the most important thing, the sensor. The XQ model has a 384 x 288 sensor with a 7-micron pixel pitch.

The XG model has a 12-micron pixel pitch and a much larger 640 x 400 French-made Lynred sensor. So it offers much better image quality than XQ35.

Another difference between the devices is in their displays - XQ35 has a 640 x 480 pixel AMOLED display, while XG35's display consists of 1024 x 768 pixels. Axion XG35 offers a much bigger display than the XQ model and the same applies to the video output.

High-quality video on the Axion XG35

The videos filmed with the XG device give us a clearer idea of what we can expect when using the device in real life.

With other devices, like Pulsar's past models and even the XQ model, there is always a discrepancy between the image quality on video and what you see when using it. The video output resolution is much smaller than the display resolution, which means that YouTube videos don't provide an accurate portrayal of image quality.

However, this is not an issue with the XG35 - the image quality is identical when you look through the device and when you look at videos filmed with it. This is because the resolution of the display and video output is identical.

These devices are powered by an APS5 battery, but because the smaller sensor has smaller energy consumption, the XQ model's battery life is significantly longer than that of the XG.

Do you want to know how long the Axion 2 XG35 lasts on a single charge?

What about the detection range?

Both are simple to operate while wearing glasses.

The difference in price

The price for the XQ35 is 1690 euros and 2490 euros for the XG35. There is around 800 euros of difference between them. We expected a much higher price for the XG model because in the price class of 1690 euros you're unable to find a device made in the EU with this level of fit and finish, a magnesium housing and with servicing in Lithuania. We can conclude that both of these two devices are competitive in terms of pricing.

In general, we can say that Pulsar did a great job with the second generation of Axion devices.

Using them is simple, regardless of whether you're left or right-handed. They're ambidextrous devices.

The last couple of things have been optimized and improved: they included a terrific lens in Axion devices. So, in all areas, the second generation of Axion is nearly perfect.

If you found this blog post helpful, you may also read individual reviews of both devices

Below, you'll find the Start-Up time for XQ35 and XG35

is part of the Marketing team at Optics Trade. She is a nature and astronomy enthusiast, that's why you'll find most of her articles in these two categories. 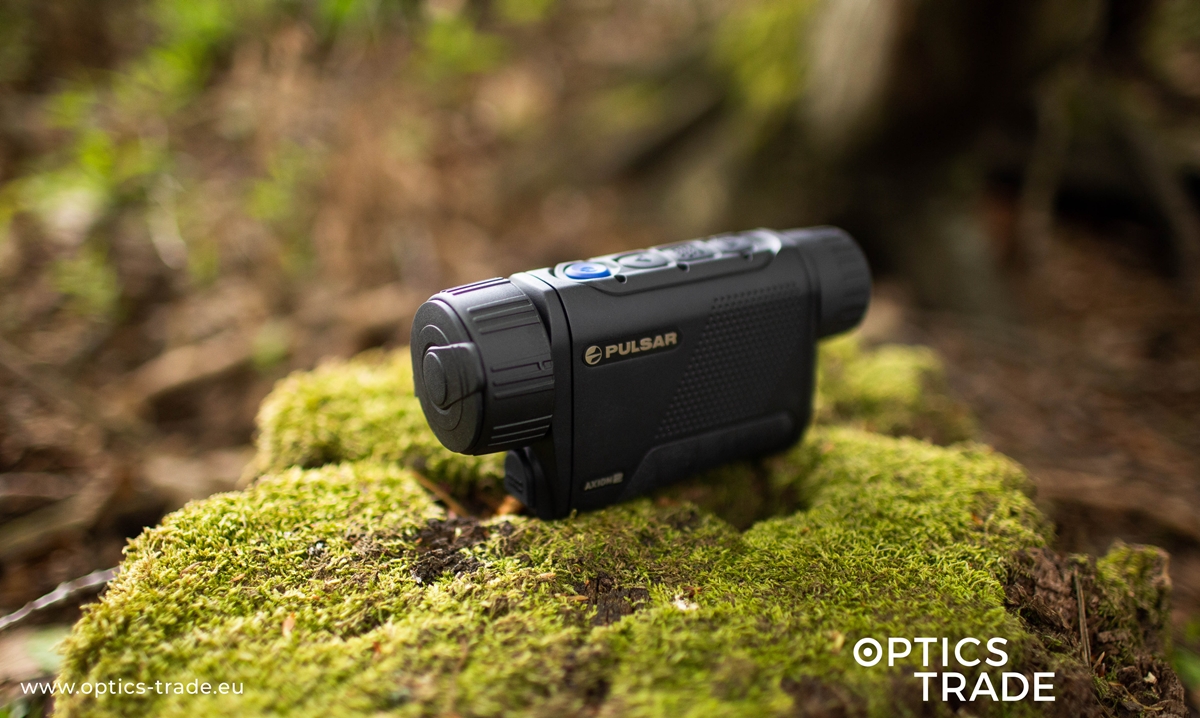 Article Name
Pulsar Axion 2 XQ35 vs XG35 (NEW 2022) | Optics Trade Debates
Description
The Pulsar Axion 2 XQ35 and XG35 are two high-quality thermal monoculars that offer much better image quality than their predecessors. The XG model has a shorter battery life, but the image and video quality are much better than on the XQ model. The XG model offers a much bigger display than the XQ model and the same also applies to the video output.
Author
Maja
Publisher Name
Optics Trade Blog
Publisher Logo