Throughout its 200-year long history, the Mauser company presented a vast array of rifles. During the production period, they named several rifles by the year of introduction date which started to result in some naming ambiguities at the turn of the century. A list of Mausers containing the numeral 98 is no exception, thus a confusion among users often arises when confronted with models such as Mauser M98 and Mauser K98k. This article should provide you with a basic understanding of how these rifles differ in design and how they developed through time.

Although the rifles share some similarities, Mauser K98k and Gewehr 98 are not the same. Mauser presented the Gewehr 98, chambered for 7.92x57mm Mauser caliber in 1898. Gewehr 98 served as a primary German service rifle up until 1935. It set the foundation for the development of various later models, many of them containing the confusing number 98.

In 1921, a Polish copy of the German Mauser Kar98az rifle (commonly used during World War I) was presented and renamed Mauser K98 with the major difference being the strengthened and improved staking hook.

The Difference Between Mauser K98 and K98k

Mauser K98k which is frequently confused with the abovementioned Polish K98, was introduced in 1935 and served as the service rifle of the German Wehrmacht up until 1945. K98k was a tad shorter than the original version – the letter ‘k’ at the end stands for ‘kurz’ or short carbine. It is a controlled feed bolt-action rifle with the bolt body featuring three locking lugs, two at the front and one at the rear end of the bolt that locks up safely with the action’s housing.

Like Gewehr 98, Mauser K98k was also chambered for 7.92x57mm Mauser caliber. The pre-war versions of K98k came with an included cleaning rod, fitted through a bayonet stud which was banned on later models. However, there are no changes in the receiver design between the models produced before and during the war. The shape of the butt plate was, on the contrary, improved on the newer versions as it was redesigned into a cupped shape increasing the overall durability of the stock which was often chipped or damaged on the early models.

After the war, the allies and liberated European countries continued the production of K98k using numerous leftover parts and German machinery captured during the war.

You can see our scope mounts offer for Mauser K98k here:

Hundred years might sound like a long time, and it certainly seemed long enough for Mauser to use the 98-mark again on their ‘new’ Mauser M98 presented in – you’ve guessed it – 1998. But the elephant never forgets, and so the naming-confusion saga continued among collectors and clients at the turn of the new century.

As the wheels within wheels began to turn, Mauser decided to offer their users a choice, presenting not one, but two versions of the new M98 in different action lengths, namely M98 Standard and M98 Magnum.

Compared to previous Mauser models, the M98 Standard comes with an enlarged receiver for added strength and durability increasing the height difference between the front and the rear mounting surface. The bolt body features three locking lugs locking up with the action’s housing.

The receiver on M98 Standard is drilled and tapped for optic mounts contrary to the Magnum model that features a double square bridge. The mounting dimensions are identical to the ones used on Mauser M12 (pre-2019), making mounts interchangeable between the rifles. The bulb on the rear side of the receiver was revoked as the feeding on M98 Standard was no longer carried out using stripper clips.

If you are looking for scope mounts suitable for Mauser M98 Standard, you can see our offer here :

The bolt body features three locking lugs, two at the front and one at the rear end of the bolt that lock up safely with the action’s housing. Other structural components such as the rear part of the receiver with a safety catch and the bolt release lever mounted on the side are the same as on M98 Standard.

If you are considering purchasing scope mounts suitable for Mauser M98 Magnum, you can have a look at our offer here:

Is Mauser M98 still made?

The short answer is yes. Both versions – M98 Standard and M98 Magnum are still manufactured today. The series was introduced in 2009 and has not been discontinued since.

The Difference Between Mauser K98k and M98

The Difference between Mauser M98 and Gewehr 98

Numerous short forms were used for the abovementioned Gewehr 98 throughout a 100-year period – it was best known as G98 or Gew98. The thing that added to the Chinese puzzle was the fact that it often used another abbreviation – the M98. Although it is clearly not the same as the modern M98 presented a century later, many may still confuse the two rifles.

When choosing the suitable mount for either of the rifles one should always keep an eye out for the production date, receiver shape and overall design. Although they may be eponymously named, the visual differences between the two are apparent at the first glance. 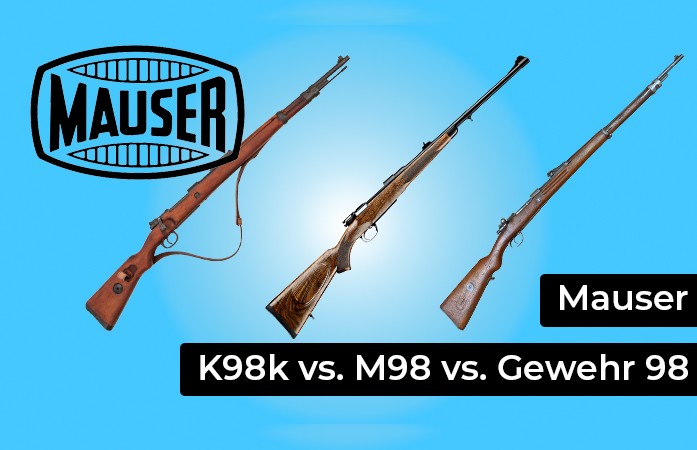 Article Name
Mauser K98k vs. M98 vs. Gewehr 98
Description
This article should provide you with a basic understanding of how these rifles differ in design and how they developed through time.
Author
Gaber
Publisher Name
Optics Trade Blog
Publisher Logo