The main goal of all companies is to create as much profit as possible. One way to achieve that is to have high earnings and low production costs. In firearm rail mounting industry, companies dealt with that by creating a type of Picatinny rails, that fits on multiple receiver lengths. With this type of strategy, they avoided the need to produce numerous products for one single rifle. The “standard” Picatinny rails used to be made of just one rigid piece, but now, companies came up with a new design of Picatinny rails with adjustable bases, which can be moved forwards and backwards under the rail and then tightened in the correct spot under the rail with a bolt. Great example of this strategy is rifle Sako 85, which comes in 6 different receiver lengths: XS, S, SM, M, L and XL. Instead of producing 6 different lengths of Picatinny rails for just that one rifle, they opted for production of only 1, 2, or 4 (depends on the company) Picatinny rails with adjustable length. Sako's traditional receivers, adapted for Optilock mounting system are a few decades old already. This system is currently used mostly on Sako 85 rifles, but in the past, it was already used on Sako 75, and even rifles that came before 75, such as L461, L579, S491, M591, L61R, L691 and so on. Thus, this new adjustable Picatinny rail solution comes in handy not only for Sako 85, but some other Sako rifles as well. 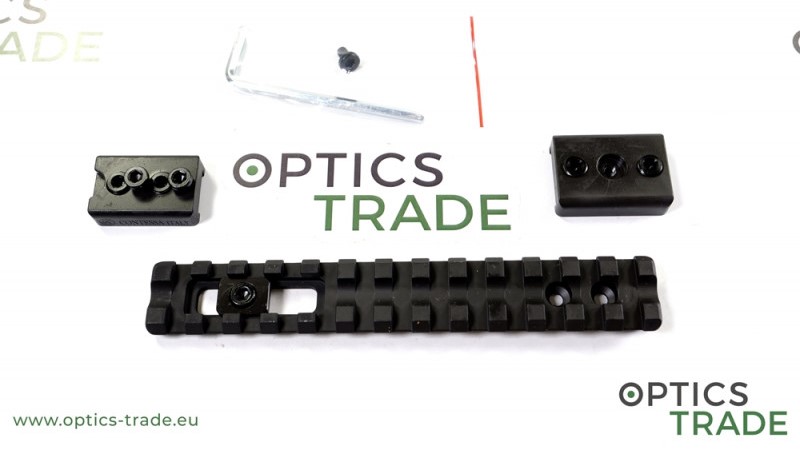 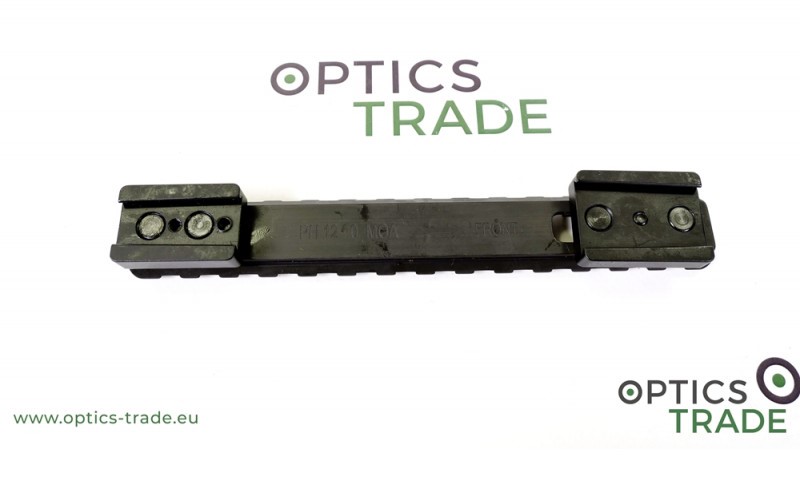 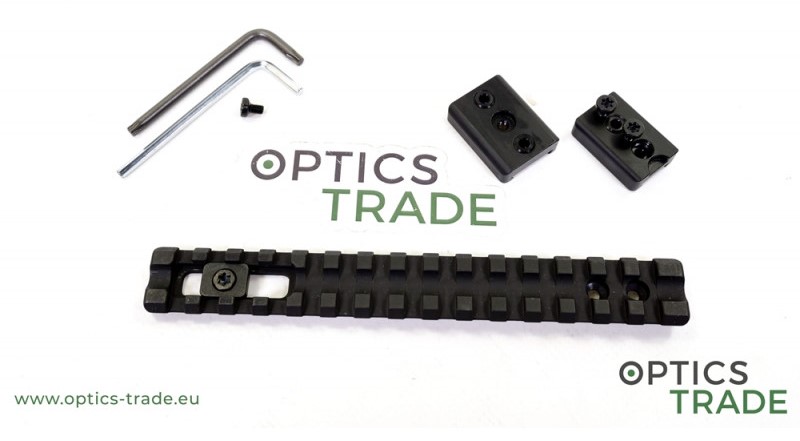 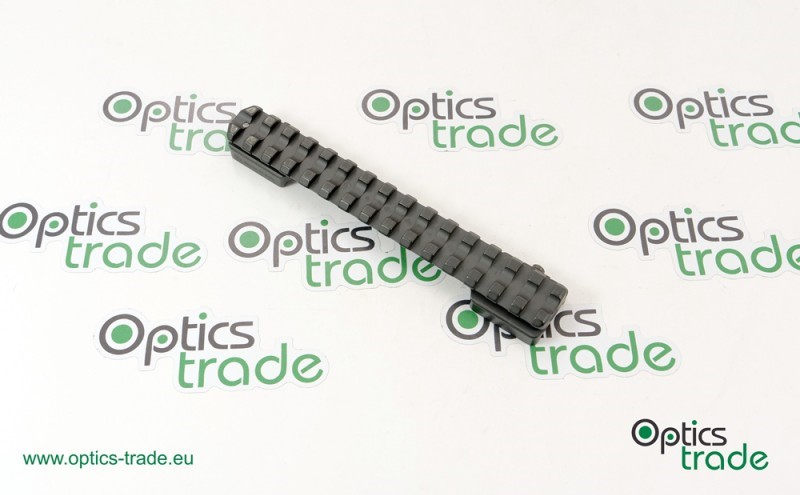 All of these 4 rail lengths come in both variants: 0 MOA and 20 MOA. The rails have a canal machined through the whole length of the rail, allowing the user to use iron sights, when no other scope or mounts are installed. Buyers also receive all the tools needed for installation along with the Picatinny rail itself, making it a bit more expensive compared to Recknagel and Rusan. For Sako, Contessa produces rails of steel.

This is a brand name of the Recknagel company, which produces Picatinny rails for Sako 85 in only 2 lengths: 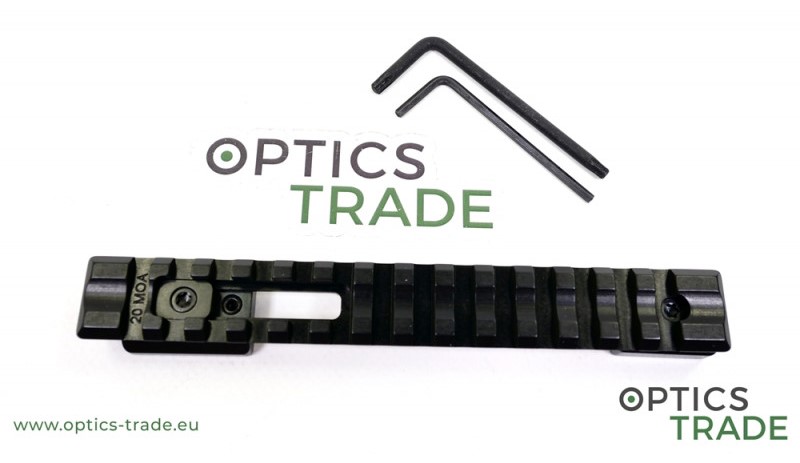 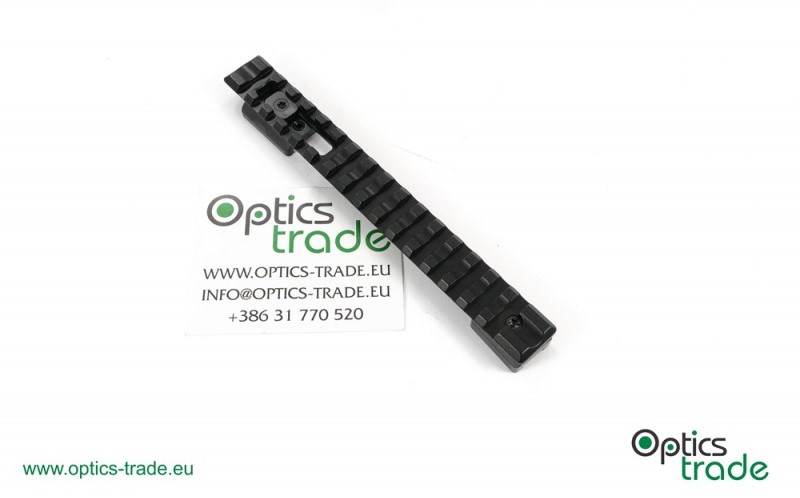 but none for the XL length of the rifle. Both of the available lengths of the rail are available in 0 MOA and 20 MOA. These rails also have a canal machined through the whole length of the rail, allowing the user to use iron sights when no other scopes or mounts are installed. Because of only 2 variants of the rail, the hole for base movement on the rail must be longer and because of that, the rail will not look too aesthetic on some of the rifle receiver lengths. By purchasing these Picatinny rails, a buyer receives all the needed tools for installation, just like with Contessa. What separates ERA-TAC from Contessa the most is the price, as ERA-TAC rail is roughly a third cheaper than Contessa. All of their rails for Sako are made of aluminium.

This is the only company of the 4, which manufactures only a single length of Picatinny rail for Sako 85. This one length is meant to be used on rifle lengths M, L and XL and is available only in 0 MOA.

There are no installation tools provided by the manufacturer, so the customer will have to take care of it by himself. The key needed for fastening the screws is 2.5mm hex key. This is the only rail, which does not have a canal machined through the middle, making the aiming through iron sights a hassle. Their rails for Sako are made of steel. 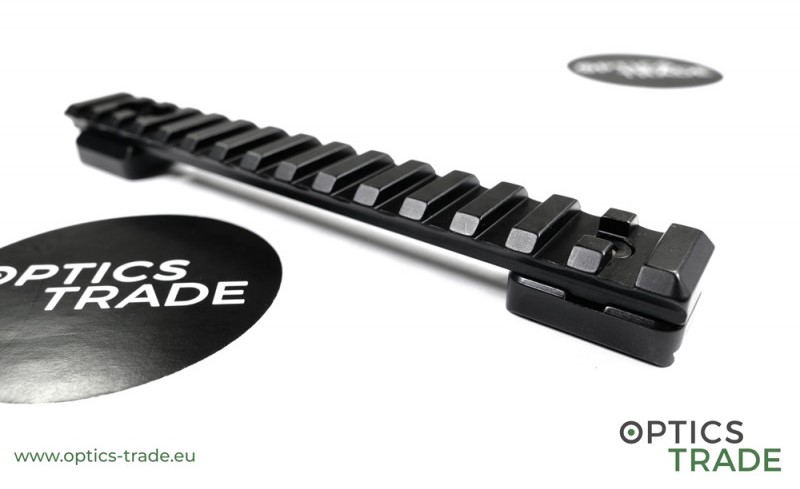 They went for 2 lengths of Picatinny rails, just like ERA-TAC, also producing one length of the rail for rifle lengths:

and none for XL. Both rail lengths come only in 0 MOA version. They machined a canal through the rail to make use of the iron sights more user-friendly, similar to Contessa and ERA-TAC. One thing Rusan shares with MAK is the absence of installation tools. Torx T20 and 2.5mm hex key are required for fastening the screws. For Sako, their rails are made of steel.

What separates 0 MOA rails apart from 20 MOA rails is the incline of the 20 MOA rail. This feature allows user of 20 MOA rail to use his rifle efficiently at longer ranges, compared to the user of 0 MOA rail.

Another function worth explaining are the screws on the bases. These type of rails usually have 3 screws on the bases, all of them positioned in a straight line. The outer screws are meant to be tightened for a tighter fit between the bases (or rather the Picatinny rail itself) and the rifle receiver, while the middle screw on the base is meant to be tightened to keep the base at the perfect position in the Picatinny rail hole. This solution makes drilling on the rifle receiver and mounting systems unnecessary.

It appears that many manufacturers of Picatinny rails believe that producing adjustable rails is the right way, despite some of the drawbacks of these types of rails. Major disadvantages of this type of solution are rails, which are not as rigid as the standard ones made from one piece. Another problem of these rails is the total length of the rail, which is in some cases longer than the receiver part designed to hold the mounts, thus the rifle does not look as appealing as rifle, which has the perfect length of the rail. For some of the customers, additional characteristic they could be bothered with, would be the height of the rail and consequently the scope itself. Considering these types of rails have moving parts and screws, they can't be as low as the ones made from one piece. We believe, the customers would be willing to pay a bit higher price for Picatinny rail made of one piece for aforementioned Sako rifles, if any of the premium manufacturers would have offered them.